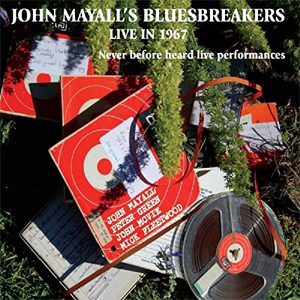 Though he doesn’t actively encourage the label, John Mayall has for many years now been known as “the godfather of the British blues boom.” He’s revered in blues and rock circles both for his impressive body of work and for his prescient ability to hire some of the best musicians for his various bands. Now approaching his 83rd birthday, John Mayall is as vital a performer as ever; he’s currently in the midst of a North American tour.

Mayall is quick to credit the true originators of the British blues scene: Alexis Korner and Cyril Davies. The two men started England’s love affair with American blues, and shepherded the movement into a formidable and influential musical force beginning in the very early 1960s. For his part, Mayall was a bit of a late bloomer. He says that while for him “music was always a hobby, from the age of about 10 or 12 years old,” he didn’t approach it seriously until he was 30. “Alexis and Cyril pioneered the whole movement,” he says, “and musicians came from all around the country to put their versions in, too.”

John Mayall’s Bluesbreakers released their first album – Mayall Plays Mayall – in 1965. The bass player in his band at that time was John McVie; he would play in Mayall’s group for several years, seeing several guitarists and drummers come and go. The most famous guitarist to pass through the ranks of the Bluesbreakers was Eric Clapton; he’s featured on the group’s second LP, 1966’s Blues Breakers with Eric Clapton. But even he didn’t stay around long. In fact, he had joined, quit and joined again before that second album was even recorded.

Mayall recalls how Peter Green “came to audition for the job of lead guitar player when Eric Clapton left on his ‘Greek expedition.’” Clapton had put together a touring group of his own called the Glands, but that effort fell apart in a matter of weeks. “I had promised Eric the job if things fell through,” Mayall recalls, and so when Clapton returned, Green was out.

Not long thereafter, Clapton left again – this time for good, going on to form Cream with Ginger Baker and Jack Bruce – and Peter Green returned. While the lineup continued to shift, there was a brief period – no more than three months, Mayall says – during which the group featured Mayall on keyboards, Green on guitar, bassist John McVie and drummer Mick Fleetwood. Those last three would eventually leave, one at a time, and put together a new group, originally called Peter Green’s Fleetwood Mac.

Yes, that Fleetwood Mac, though the hard-charging blues-revival sound of the early Mac bears no sonic resemblance to the radio-friendly 1970s lineup of the band, featuring only McVie and Fleetwood from the original quartet. But while the proto-Fleetwood Mac lineup of the Bluesbreakers wasn’t together long enough to record and release any albums, Mayall has recently released 2 CDs’ worth of some recently-discovered live tapes of the band.

Live in 1967 Volumes One and Two capture the group live onstage in a variety of London clubs, the Marquee Club (one of the Who‘s favorite haunts), Manor House and Klook’s Kleek among them. The Bluesbreakers of that period were a tight band, road-tested by constant playing. “We were working steadily like always in those days,” Mayall says. “We did at least 300 shows a year.” The CDs – recorded by a fan using the best mobile equipment available at the time – may sound a bit rough to listeners used to pristine studio recordings, but the energy is undeniable.

The short-lived lineup’s repertoire at that time consisted of a wide variety of blues, from classics like “Stormy Monday” to Willie Dixon‘s “I Can’t Quit You Baby” to Freddie King‘s “San-ho-zay” to original compositions written by Mayall or Green. Some of those tunes remain in Mayall’s set list to this very day.

The constant shifting of personnel might have daunted some bandleaders, but not Mayall. “Nobody left en masse,” he explains. “It was just the way things were. Things [were] just rotating … business as usual, really.” And there were no hard feelings; he wished Fleetwood Mac the best. “I was just very happy that they had got it together,” he says. He notes that in particular, guitarist Peter Green “was always a joy to listen to.”

While Mayall retired the Bluesbreakers band name several years ago, he hasn’t retired from playing, and his current band – newly pared down to a trio featuring longtime musical associates Greg Rzab (bass) and drummer Jay Davenport – performs with all the fire, energy and passion blues fans have come to expect from Mayall. And he’s as proud of his current band as any that he’s led in the last more than half century. “I never found it difficult to find excellent musicians,” he says.

You may also enjoy my earlier interview with John Mayall.