The Christmas Jam
The annual event billed as “Warren Haynes Presents: The Christmas Jam” supports the work of the nonprofit Asheville Area Habitat for Humanity; funds are used to purchase land for Habitat neighborhoods and to build safe, affordable homes for families. Even prior to the 2015 Jam, the cumulative total raised topped $1.8 million. Warren remembers that back in 1988, “it was a no-pressure event.” From the very start, funds raised were donated to local charities. “And,” Haynes recalls with pride, “each year it got a little better.”

After a few years at 45 Cherry, the event was moved to a popular downtown club, Be Here Now. Warren’s band mate in Gov’t Mule was among the regular participants. “Allen Woody would get in his little yellow pickup truck and drive from Nashville every year,” Haynes recalls with a smile. If offered a per diem, “Allen would just wave his hand, and say, ‘Aww, just put it toward the charity.’ He did that year after year.” Woody passed away in 2008. 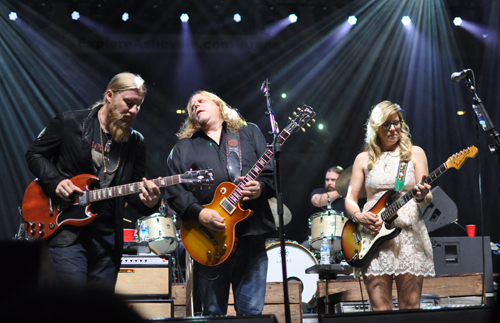 As the Jam grew in size and scope, security was sometimes wanting. “Derek Trucks‘ guitar got stolen out of the dressing room because of people running amok,” Warren says. (The guitar was later recovered.) After that incident, his wife Stefani – a Woodfin native and longtime music business professional in her own right – said, “Okay, that’s it. We’re not doing it at this level any more. We’re going to run it like a real show.” The Jam moved to the 2400-seat Thomas Wolfe Auditorium in 1999, nearly selling out; from there it moved next door to the Asheville Civic Center (now the US Cellular Center, capacity 7650), where it is currently held every December. Tickets for the concert gala routinely sell out months in advance.

Haynes’ commitment to combining the music he loves with giving back to the community isn’t all that surprising. Now an Asheville councilman, Brian Haynes says, “We are our parents’ children. My whole family sort of feels that way about things.” Warren concurs, and sums up a life lesson his parents taught him: “It’s just as easy to be nice as it is to not be nice. There’s the same amount of energy that goes into both sides of the spectrum.”

WNC Music Then and Now
Warren Haynes returns to his Asheville hometown often. His father, mother, and his brothers’ families all live in WNC. “I’m the only one that’s strayed!” he chuckles warmly.

Those frequent visits afford Haynes perspective on the local music scene. Then as now, bluegrass and folk were big locally. Haynes believes that along with the rise of disco music, North Carolina’s 1986 raising of the legal drinking age cleared out the bars, reducing the demand for live music. Prior to then, he says, “it was easier to be an artist or band playing original music, and actually make a living performing.”

But Warren remains upbeat, observing that the WNC music scene is similar to what it was thirty-plus years ago, but much more diverse: “Take that 70s scene and expand it in all directions. The spirit of the scene now is really big and strong, and it covers a lot of musical territory.”

What’s Next?
Every year, Warren Haynes calls upon musical friends, associates, and peers to put together the Christmas Jam lineup. Participants have included Jason Isbell, Widespread Panic, Keb’ Mo’, the Avett Brothers, Los Lobos, Ani DiFranco, Bernie Worrell, and dozens more. It’s all a massive undertaking, but Haynes’ commitment – coupled with the event’s enduring popularity – is enough to sustain the Jam well into the future.

But each year’s Christmas Jam is only a part of Haynes’ work. He’s producing an upcoming album by guitar prodigy Marcus King, and fans can expect another Gov’t Mule album…eventually. “We’re just in the conceptual process right now; we haven’t even started rehearsing or anything.” Haynes stresses that maintaining creative control means “you’ll be able to make the music you want to make.”

These days, Warren Haynes is a household name in both music and philanthropic circles. Unsurprisingly, he’s made friends and earned admirers all along the way; he readily acknowledges their role in the successes he’s enjoyed. “So many people helped us move the Christmas Jam to the next level, and the next level after that,” he says. “It’s reached a point where people call us, and say, ‘Hey, I just wanted to let you know I’m available if you need me this year,’ which is great.”

As our dialogue ends, Warren pivots both decisively and effortlessly. Still engaging and friendly as ever, he turns his attention to the immediate tasks at hand: preparing for a quick drive across town for a radio interview, and a long list of other pre-Jam activities. With a warm handshake he sends me on my way. “See you at the Jam,” he smiles. Off I go, and off he goes. But with his local roots and stewardship of the Christmas Jam, it’s certain that however far Warren Haynes roams from WNC, he’ll always return home.