Note: A shorter, edited version of this feature appeared as the cover story in the July 2016 issue of WNC Magazine.

It’s minutes before 1 a.m. on Sunday, December 12, 2015. Guitarist, producer and songwriter Warren Haynes is onstage at Asheville’s U.S. Cellular Center, jamming with The Doobie Brothers. The 27th annual Warren Haynes Christmas Jam is far past its halfway point, yet nowhere near winding down. The benefit concert – a chance for Haynes to bring together his famous friends and associates to make music, all in service of the greater good of his community – is only the most high-profile example of Haynes’ deep roots in his hometown of Asheville, North Carolina. 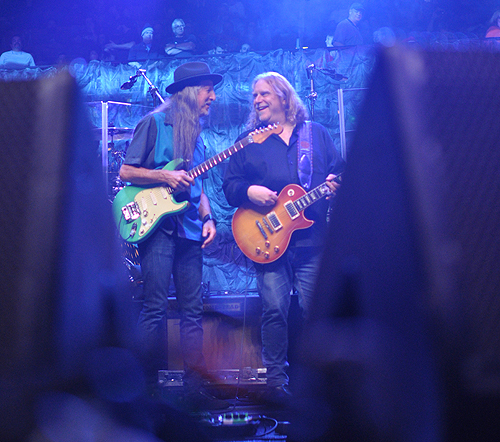 Warren Haynes (at right) with The Doobie Brothers’ Patrick Simmons, onstage at the 2015 Christmas Jam in Asheville NC. Photo by Audrey Hermon Kopp

There’s a fleeting moment between songs – probably visible only to the professional photographers working in “the pit” at the foot of the stage – that captures the essence of Haynes on this stellar night. Out on the expansive and well-lit stage, in front of thousands of enthusiastic fans, Warren leans in to share a quick few off-mic words and a warm smile with the Doobies’ guitarist Patrick Simmons. That smile conveys the sincere feeling that at this moment, on this stage, with all these musicians, and all these fans, in his hometown, there is nothing else in the world that Warren Haynes would want to be doing, nowhere else he’d rather be.

A day earlier, I meet with Haynes at his temporary home, a condo just south of downtown Asheville. He graciously and readily makes time for our conversation, even though he has more than a few other things on his mind. When I arrive, he greets me warmly as if we have met before (we haven’t), and quickly introduces me to the roomful of people. Warren has been in the midst of hand-signing a stack of limited-edition concert posters; those will be sold at the merch tables during tomorrow night’s Jam; they’re yet another means of raising funds for Haynes’ favorite charity, Habitat for Humanity.

The staffers collect their materials and make quick goodbyes as they head off to take care of other last-minute tasks. With only the two of us remaining, the vibe of the room changes completely. Haynes makes a point of turning off the ringer on his phone, and we each choose a large, comfortable chair in the condo’s living room. It’s remarkable how quickly Warren shifts gears from the business of the Christmas Jam to a wide-ranging, informal chat with a fellow music lover.

Over the course of the next hour, Haynes is totally present: setting aside all of the pressing matters related to the imminent concert, he chats with me about his life, career, and music in general. As serious fans of music often do, we occasionally wander into topics that would only interest hardcore music fans, but mostly we discuss Warren’s years as a musician, and the events leading up to the present-day all-star concert event.

Warren Haynes is a world-renowned musician, thanks in part to his long tenure with the Allman Brothers Band, his own mega-successful group Gov’t Mule, and his solo recordings. He’s also evolved into a world-class philanthropist, founding and shepherding the long running Christmas Jam concert event. But what I learned this day is that through it all, Haynes is still a guitar-playing North Asheville kid who jumps at every chance to get onstage and play.

WNC Roots
Haynes’ roots in western North Carolina go back at least three generations. Warren’s parents moved from Polk County after the birth of their first son, Tim. He grew up in North Asheville, a few blocks behind Moritz Music [now Musicians’ Workshop] on Merrimon Avenue. “The bus would drop us off there after school; we’d all go spend an hour or two in the music store before going home. That was my stomping ground.” Brian Haynes notes “Tim and I guided Warren’s musical tastes a little bit there in the early years.”

A young Warren frequented Caesar’s Parlor, on the northeast corner of Merrimon and Edgewood. In those days, the legal drinking age was eighteen. But, Haynes laughs, “a few of us would get away with sneaking in to watch music. And once I discovered that was a possibility, I did that all the time.” Warren saw, heard, and became friends with local musicians including Ray Sisk, Malcolm Holcombe, and Larry Rhodes. “They took me under their wings and helped me learn more about songwriting.” Eventually, he was invited onstage to play a borrowed guitar. “For a fourteen year old kid, it was a big thrill,” he says.

Haynes was destined for bigger things. Brother Brian says, “I knew early on – not long after he started playing the guitar – that Warren was going to be very good; he never put it down. I was always confident that he had what it took.” By the late 1970s, Warren had a band called Ricochet. “It was a Southern rock kind of band; we were gaining a lot of popularity for two or three years.”

Going National
Word spread about the young Asheville guitarist. In 1980 Warren got a phone call from outlaw country music legend David Allan Coe. “I was nineteen or twenty,” Haynes recalls. “And I actually said to him, ‘Y’know, I don’t consider myself a country guitar player. And I’m not really interested if I have to play like somebody else.’”

Undeterred, Coe replied, “I’m looking for a blues/rock guitar player to add an edge to my sound.” And Haynes said, “Well, maybe I’m your guy.” He toured with Coe’s band for four years, followed by a stint with the Nighthawks. During this time Warren also co-wrote a number one hit for Garth Brooks, “Two of a Kind, Workin’ on a Full House.”

From that point forward, Warren Haynes’ musical activities became even more widely known. He was recruited to play guitar in Dickey Betts‘ group (Betts’ regular band, The Allman Brothers Band, was inactive in those years). When the ABB reunited in 1989, they brought Haynes aboard. The group made a point of not pressuring Warren to sound like original guitarist Duane Allman. He recalls, “Their attitude was, ‘We hired you to play like you.’”

Haynes launched his own band, Gov’t Mule, in 1994, dividing his time between that group, the Allman Brothers, and his many other musical activities. The Allman Brothers Band played their final show in 2014. Haynes’ fifth solo album – the rootsy, Americana-flavored Ashes & Dust – was released in 2015 to wide acclaim.

Even though Haynes’ musical path took him far from home, in many ways he never really left. Even in his earliest days as a touring musician, he’d return home to be with friends and family for the Holidays. And late in those evenings, Warren would often head out to some of his favorite old haunts (including the now long-gone bar 45 Cherry) and jam with fellow musicians who were also in town for the Holidays. Nobody would have imagined it at the time, but those annual, informal get-togethers would soon evolve into the world-famous Christmas Jam.