Coming out of the diverse Atlanta music scene, Gringo Star makes hooky pop-rock that – while informed by sounds of the 1960s – doesn’t rely on aping vintage sounds. Their repertoire is more varied stylistically than the standard-issue indie-rock outfit. “We’re not trying to recreate some specific genre,” says guitarist Nick Furgiuele. “We like to make different-sounding stuff; we don’t want someone to come see us play the same song twelve times in a row.”

Formed nearly a decade ago by Furgiuele and his brother Peter Furgiuele, the band burst onto the scene with the self-released album All Y’all. Two more albums followed, along with scattered singles and an early EP. All of those were self-released, too, though their debut album was licensed for European distribution by a proper label. 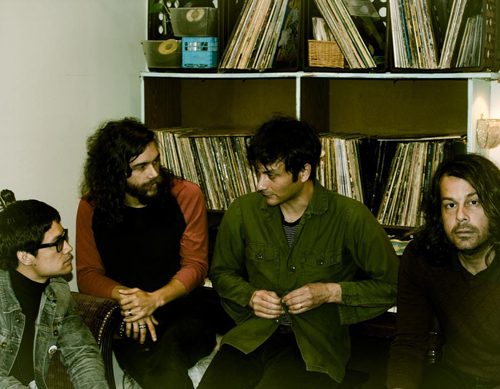 Things didn’t go so well with that arrangement. “File them under labels that are kind of vacant,” laughs Furgiuele. “You’ll try to communicate with them about things. Maybe they’ll get back to you, and maybe they won’t.” Chastened by that experience, Gringo Star tread much more cautiously as they decided to reach for more widespread success. While the songs for their fourth album, The Sides and In Between (out August 26) were nearly finished over a year and a half ago, the band took time “ trying to build up the team around the release,” Furgiuele says.

After handling their own business affairs for years, Gringo Star first got themselves a manager, Greg Vegas. “We met him on tour after we had finished the album,” Furgiuele says. “When we started working with him, we let him handle finding a label.” Vegas and the band settled on Nevado Music, home to a dozen like-minded indie artists.

“Nevado seems like a family,” says Furgiuele. “We’re getting a bigger push than we had on the other records, for sure. They’re invested; we’ll probably put out the next album with them, too.” The label reviewed the 18 or so tracks the band hat recorded, paring the list down to the 10 best. “They remixed a couple of those and remastered the album.” All that took time, but Furgiele says, “we didn’t want to rush the release at that point; we wanted it to be more planned out.”

For years now, one hallmark of a Gringo Star show has been onstage instrument switching. But these days the band has scaled those antics back a bit. Furgiuele explains, “Eight or ten years ago – and even more recently – we have had two or three guys in the band who could play drums and guitar, so we’d switch around.” The band’s current lineup – only the brothers Furgiuele remain from the original band – features a permanent drummer in Jonathan Bragg. “Now it’s a little more streamlined,” admits Furgiuele. “We do switch between guitars, bass and keys, but the drummer stays where he is.”

Bassist Josh Longino joined the band recently, in time for the tour to promote The Sides and In Between, the band’s most polished effort to date. “He’s working out great,” says Furgiuele. The band’s collaborative nature helps make their songs the best they can be. “There’s not necessarily a set [songwriting] method,” says Furgiuele. “However it comes, it comes. My brother recorded the last album at his studio, so we had a lot of time for experimenting, trying different techniques to get sounds. Some songs, we had never played live before. We would start laying down drums, layering a track as we went. And sometimes they would take on [qualities] that we hadn’t even planned.”

Nick and Peter Furgiuele write the songs, and maintain Gringo Star’s musical vision. But are they subject to the sibling discord that has plagued Oasis, the Everly Brothers and the Kinks? “We get along pretty well,” Nick chuckles. “But I guess like any brothers locked into a vehicle for months at a time, little things get under each other’s skin. There have been a few times when we’ve broken up. But now we’re pretty cool.”