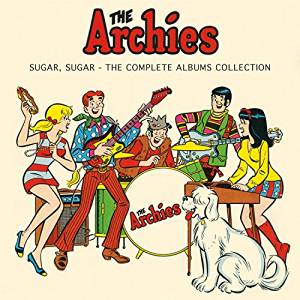 File next to: Bay City Rollers, 1910 Fruitgum Company, The Jackson 5

After his experience with The Monkees, pop impresario Don Kirshner made the calculated decision that his next project would be one in which the artists couldn’t rebel. Thus was born The Archies, a cartoon group that only existed on television. Well, that’s not completely true: a real-life studio collective including Jeff Barry, Andy Kim and Ron Dante were – to varying degrees – responsible for five studio LPs. Most people remember “Sugar, Sugar,” and some will recall “Archie’s Theme (Everything’s Archie),” but the remaining 48 songs are largely forgotten. A new 5CD set brings them back. The bubblegum songwriting and playing is surprisingly strong; there’s even a garage-rock vibe to some deep cuts. Things get a bit less interesting toward the end, but this music is better and weightier than you might expect. Some care with mastering would have helped, but the discs are perfectly listenable.