As a band, the Cowsills formed in 1965. But they can make a credible claim to having been together much earlier. A self-contained group made up completely of family members – five brothers, a sister and their mom – the real-life Cowsills were the inspiration for the popular TV series The Partridge Family. All 5 of their late 1960s albums charted, and they’re best remembered for their 1967 smash hit, “The Rain, The Park & Other Things.”

A half-century later, three of the surviving Cowsills carry on the family tradition, performing their fun, feel-good sunshine pop for 21st century audiences. Today the group includes brothers Bob and Paul plus their youngest sibling, Susan (John Cowsill performs with his siblings when he’s not on tour with The Beach Boys, a gig he’s held since 2000). 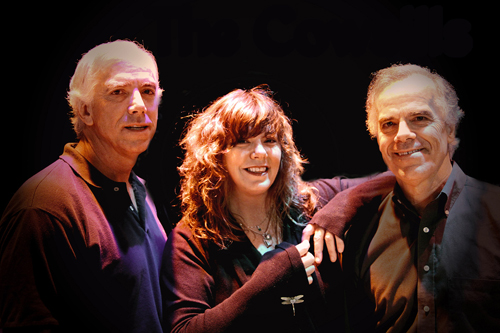 “Between February 9, 1964 – the night we all saw the Beatles on the Ed Sullivan Show – and 1970, there was a finite number of groups who came out based on what we saw and heard and felt that night,” Susan Cowsill says. “The Cowsills belong to that demographic of bands. And because we’re 10 years younger than our peers, we’re kind of the ‘last of the Mohicans’ of that genre and era.”

The Cowsills are part of the Happy Together Tour 2016, a package concert that includes other 1960s hitmakers such as Mark Lindsay (formerly of Paul Revere & the Raiders), Gary Puckett, Three Dog Night‘s Chuck Negron, The Spencer Davis Group, and headliner/hosts The Turtles. “This is our second year,” says Susan. “We had been trying to get on [the tour] forever. We’re so grateful to be on the tour; it’s the best thing to happen to me and my brothers.”

Organizers Howard Kaylan and Mark Volman (the Turtles) have fine-tuned the package tour to give fans maximum enjoyment for their entertainment dollar. There’s a tried-and-true formula, says Susan, “and it does not stray. You do your hits.” For the Cowsills’ set, that means concertgoers will hear the group’s biggest hit plus favorites like “Indian Lake,” “We Can Fly,” the title song from the musical Hair, and the theme to the TV series Love, American Style.

“No covers,” Susan emphasizes. She half-jokes, “We wanted to do ‘I Think I Love You,’” a 1970 hit for The Partridge Family. “But everybody does their own hits; it’s a cavalcade of stars!” The tour travels like one, too: the Cowsills travel on one of two buses, along with the other artists and crew.

Referencing her brothers (including deceased elder siblings Bill and Barry), Susan notes that “we were all born with this gift to make music. There wasn’t any money for lessons, I can tell you. It was just a phenomenon.” The Cowsills aren’t only about nostalgia; they’ll record a new album next year. Now as back in the 1960s, they’ll play their own instruments. “We were a rockin’ band,” Susan says. “And we still are.”