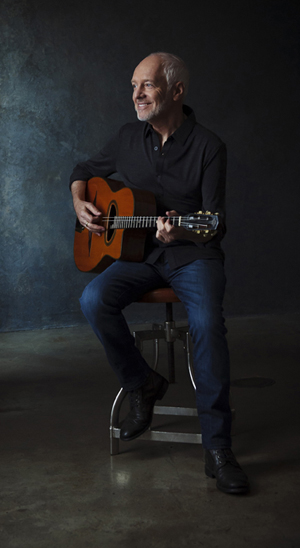 Peter Frampton has decades of experience dealing with misconceptions. The rock star responsible for the massively popular 1976 double LP Frampton Comes Alive has long since come to terms with the fact that his biggest success was both a blessing and a curse. He laughs heartily and says, “I love it when people say, ‘Yeah, I bought your first album…’ There are always going to be those.”

In reality, Frampton had been a successful musician for more than a decade before that “first” (actually his fifth) solo album exploded on the charts. A schoolmate and friend of David Jones (later Bowie), Frampton scored several Top 10 hit singles in his native England with his band the Herd. He left that band in 1968 to form Humble Pie with Steve Marriott; Humble Pie was a transatlantic success.

Frampton had gone solo by the time their biggest hit, the live Rockin’ the Fillmore, was released. He began that solo career in earnest, enlisting the help of some of the friends he had made during his parallel career as a session guitarist. Ringo Starr and Billy Preston were just some of the players on Frampton’s early albums.

But those first four albums sold only modestly, and were discovered only belatedly by fans after the success of Frampton Comes Alive. Even now, people are still discovering the guitarist’s deep catalog (18 albums and counting). “I have to say that the younger generation that are coming along are the ones who are bringing me second- or third-hand copies of [1973’s] Frampton’s Camel to sign,” Frampton says. “It’s a very nice feeling.”

It’s also gratifying for Frampton to be taken seriously as a musician. The lead guitar spot on David Bowie‘s 1987 Glass Spider tour reintroduced Frampton’s guitar skills to an audience that may have looked upon him as a mere pop star. Bowie “knew what had happened to me,” Frampton says. “Frampton Comes Alive had its good and its bad sides: it highlighted me as a performer – the face, the album, the music and everything – but definitely, the guitar playing and musicianship were overshadowed.”

Frampton’s latest album, Acoustic Classics, helps keep the focus on his guitar playing. Stripped of arena-rock filigree, the album’s tracks – hit songs, favorites pre-dating Frampton Comes Alive and a new tune – explore the textures of Frampton’s acoustic guitar and voice. Yes, there’s even some talk-box on an acoustic reading of “Show Me the Way,” but elsewhere the album displays Frampton’s fascination with the guitar styles of jazz heroes.

Frampton counts gypsy jazz guitarist Django Reinhardt as one of his biggest influences. He says that his playing leans into jazz a bit “because it’s a challenge! It’s so difficult. I call myself ‘a-lick-a-day Frampton.’ If I can pick up one of Django’s licks every day, I’m a better player.”

Those influences helped shape Frampton’s style even back in his days with the Herd. “’I’ve always been a jazz and blues fan,” he says. “In the late sixties, everybody and their uncle was trying to sound and look like Eric Clapton; when I realized that, I decided to go a different way. So I’m not a jazz player, but I’m jazz-influenced.”

These days Frampton doesn’t feel the pressure of pop stardom. “It used to bother me, and then when I got the Grammy [Best Pop Instrumental Album, 2007] for Fingerprints, I thought, ‘Oh … good.’ Because I didn’t sing a note on that record!” He admits that the occasional fan has expectations of him based on music made 40 years ago by a man of only 26. “It’s still an ongoing thing, but I feel that … well, there’s nothing to look at anymore,” he chuckles. “They’re not coming to concerts for my looks.”