Nominally a country and western/roots band, the Mavericks have long been truly unclassifiable. Their musical eclecticism has always been a part of the band’s makeup, but since coming back from an eight-year hiatus, the Mavericks have made that eclectic character a central component in their music. Leader and songwriter Raul Malo explains the difference between the old and newer Mavericks. “Back then, we were kids. We were just trying stuff out, and trying to expand our wings within the confines of a country music major label.”

But when the band members went their separate ways in 2004, Malo says that “everybody went on a kind of musical quest, went their own way. And I think all that information has now informed this new era of the Mavericks.” Since re-forming in 2012, the Mavericks have released two albums – In Time, and 2015’s critically-acclaimed Mono. 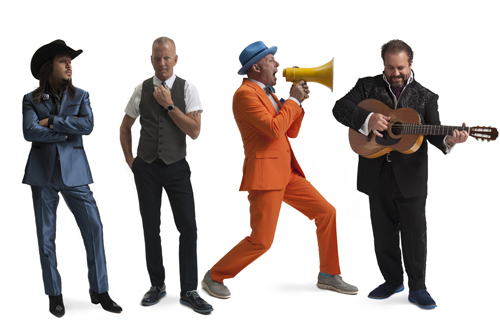 “On Mono, the eclecticism is what’s celebrated the most,” Malo says. “Ask 10 different people what the Mavericks are, and you’re gonna get 10 different answers. So we might as well do whatever we want anyway!” On Mono, the group tears through a wide variety of styles, from Cuban salsa to Tex-Mex country, giving it all the trademark Mavericks sound, with Malo’s supple voice at the center of things.

When it’s suggested that “norteAmericana” might be an accurate one-word descriptor for the Mavericks’ music, Malo laughs heartily and says, “I like it.” But he notes that there’s never a conscious or specific goal in songwriting or arrangement to put forth a particular style. “I don’t think anybody in the band starts out thinking, ‘Oh, let’s do this one like this.’ We just start playing; once a song starts to get a groove, that’s what it ends up sounding like.”

In the mid 1990s, the Miami band scored major plaudits: the Mavericks won three Academy of Country Music Awards, two Country Music Association Awards, and a Grammy. But by the early 2000s, internal dissension would eventually fracture the group. “Everybody was pretty burned out at that point,” Malo admits. “It was a pretty monotonous existence, and quite honestly there was turmoil within the band.” Even after they got back together, problems remained; in 2014 the band dismissed bassist and founding member Robert Reynolds.

But even before Reynolds’ dismissal, the Mavericks had begun to get back on track. After years as a solo artist, Malo found that he had “a batch of songs that really sounded like they could be a Mavericks record. That’s initially what prompted the reunion: ‘Hey, let’s go make this record!’”

On the heels of Mono‘s success, the Mavericks have decided to assert greater control over their collective career. A key step is the formation of their own independent record label, Mono Mundo Recordings. Their ambitious program calls for a live concert album due out this fall, plus a new studio album in 2017.

“An artist like us – one that can do so many different things – needs a creative outlet,” Malo says. “So now we have the ability to record and play whatever we want, whenever we want. We don’t have to wait for approval from, say, the head of marketing; we can cut through the red tape that sometimes bogs down a [bigger] record label.”

The Mavericks won the Americana Music Association’s “Best Duo or Group of the Year” last summer; upon receiving the award, Malo gasped, “Holy shit! We won something!” Asked about that now, he’s a bit more circumspect. “Like my old friend K.T. Oslin would say, ‘If you hang out long enough, they give you awards.’”