Dan Hartman was also an original member of The Edgar Winter Group; he was with the band 1972-75. Winter says that “Dan was the first person I enlisted for The Edgar Winter Group. It was a huge talent search; I listened to hundreds of demo tapes to choose talented people for what I wanted to be the quintessential American rock band.” Charismatic personality and stage presence were important requirements. “More or less, I wanted them to be stars in their own right,” Winter recalls.

“The thing that I loved about Dan was that he had a youthful innocence and enthusiasm. He loved commercial music, and he didn’t have to try to be commercial. He had a natural ability to come up with simple ideas that were never overdone.” Winter valued the contrast between Montrose’s edgy, bad-boy persona and Hartman’s fresh-faced, cheerful presence. “If I had got Rick to play in that band, I don’t think it would have had the same fire. Contrast and balance is what made that band work.”

“The thing about Dan was that he was originally a guitarist,” Winter says. “I had to talk him into playing bass. He was a multi-instrumentalist like myself, but he was not a virtuoso player. Yet he would always find the right part to complement the song. Rock solid, and with the right groove. As well as being a great songwriter, he knew what to play and when to play it.” 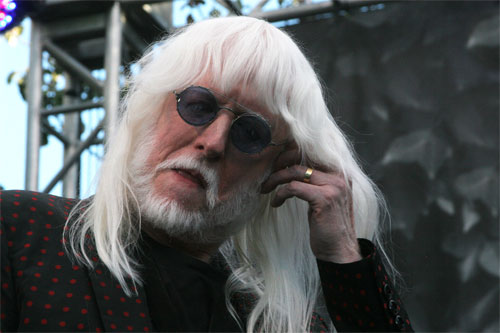 Edgar’s instincts regarding Hartman’s innate pop music sensibility were soon proven on the mark: as a solo artist, Dan Hartman had a massive hit with the title track off of his third solo LP, 1978’s Instant Replay. He would score an even bigger hit in 1984 with “I Can Dream About You,” and his co-write and production of James Brown‘s “Living in America” earned a Grammy nomination (Best R&B Song) and award (Best Male R&B Vocal Performance), charting in fourteen countries around the world. Hartman died from an AIDS-related brain tumor in 1994 at the age of 43.

The musician closest to Edgar Winter – from childhood into the 21st century – has always been his brother Johnny. Edgar Winter recalls their childhood in Beaumont, Texas. “All of our family was musical, but not professionally” he says. “’I learned a lot from my father and mother musically.” He learned ukulele, piano and guitar at home, as did his brother Johnny, nearly three years his senior. Once Johnny got a record deal, not only did he ask his brother to join his band, but he encouraged Edgar to sing. Before that time, “I had only considered myself an instrumentalist,” Edgar says.

The brothers each went their own way musically, though their paths would often cross. Johnny led his own blues trio, while Edgar put together bands that would feature his sax and synthesizer playing. Johnny would occasionally sit in, and the brothers made some albums together as well.

“Johnny was different than all of those other guys,” Edgar says. “First of all, Johnny is my all-time musical hero.” Edgar notes that the brothers had different musical tastes. “He loved blues early on, but he didn’t really commit himself to that until much later in life. When we played together, we played everything that was on the radio: Wilson Pickett, country, ‘British Invasion’ groups like The Animals, Kinks, Beatles. Everything.”

Edgar believes that the defining characteristic of his brother’s guitar style was “relentless intensity as a soloist. A lot of blues players would be very conscious of space, and would play with a certain mature sensibility. But Johnny broke the mold; he was full-bore, more like a blues shredder.” Edgar considers his brother a true original: “He didn’t play anything exactly the same way anybody else played it,” he says. “When we started out, he would listen to old blues records, and figure out exactly what those guys played. But as his playing developed, he altered all of those things; all of those songs ended up having Johnny’s ‘spin.’”

Though he battled addiction for many years, Johnny Winter enjoyed a fertile career that included many high points. After fading from the music scene somewhat, he roared back in the 1980s, finding a home with Bruce Iglauer‘s Alligator Records. Winter released three highly-regarded records for that label.

Johnny’s recorded output slowed after leaving Alligator, though he went on touring to enthusiastic audiences even as his health declined precipitously. “It was very sad for me to listen to Johnny in later life, because I was always accustomed to the way he played when he was young,” Edgar says. Though Johnny had long been clean and sober, and had gotten his business affairs in order thanks to second guitarist and manager Paul Nelson, he succumbed to complications from emphysema and pneumonia and died in 2014; he had made it past his 70th birthday.

As for Edgar Winter himself, he continued to record and perform after the end of his years on Columbia-associated labels. His most recent album, 2008’s Rebel Road features collaborations with brother Johnny, country star Clint Black, and former Guns N’ Roses guitarist Slash.

“I started out as a jazz guy,” Edgar says. “I loved to play a million notes. I wanted to do something really amazing and impressive all the time. As I’ve grown older, I can still summon that up, but I enjoy leaving space between the notes.” He compares music to meditation: “Those spaces are like the pure consciousness that surrounds all thought. You can quiet your thoughts, but you can never really stop consciousness.”

These days, Edgar Winter is busy with pursuits musical and otherwise. “I’m more interested right now in writing poetry and prose,” he says. “I have a book of poetry – dedicated to my wife Monique – of pieces that started out as song lyrics.” He’s also working on a book of short stories. “They occur in a mythical place called Shadowlands,” he says. Winter is also working on a stage musical based on his early 1970s smash hit, “Frankenstein.”

I ask Edgar if he has ever considered writing an autobiography; though his memories are sharp and clear, he has little interest in doing so. “I will probably write a book sometime, but it’s not going to be a down and dirty tell-all full of intimate details. Not to say it wouldn’t make a great book, but I’m just not going to do it. Stuff in your family is personal, and I’m not interested in writing about it.” Meanwhile, when he’s not on tour, Edgar Winter lives in Beverly Hills, California with his wife.