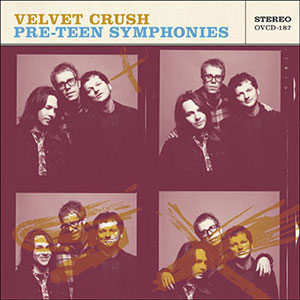 File next to: The Smithereens, Matthew Sweet, Teenage Fanclub

If they didn’t scale the heights of commercial success that some of their contemporaries reached, it was no fault of Velvet Crush. All of the ingredients for success were there: muscular playing and arrangements, razor-sharp hooks, great lead and harmony vocals, and solid songwriting. They persevered through seven albums – they’re technically still together, though they’ve been inactive for more than a decade – but their second release, Teenage Symphonies to God, is their masterpiece. A near-perfect synthesis of power pop and the best of country-rock (Byrds, Flying Burrito Brothers), it proved hard to follow. But now (and with the band’s cooperation) Omnivore has unearthed demos for that album (plus a live show from the same era featuring powerpop hero Tommy Keene) that show a less-polished side of the band. Essential for fans, it’s highly recommended to anyone who enjoys Teenage Symphonies to God.