Bill Kopp: I notice the collaborative nature of the songwriter credits on TTB albums. How does songwriting work in the band?

Derek Trucks: This record went a lot of different ways, and it never felt forced. For the songs that Doyle Bramhall II and I wrote together, it would be the two of us heading out to the studio, sometimes with no seed of an idea, just playing and coming up with things. Sometimes there would be a bit of a sketch. We would track drums and bass ourselves and build a track. Sometimes we’d call Mike Mattison in, tell him what we were thinking, and he’d help with a lyric. And then we’d craft lyrics, the two or three of us together.

Other times, there were songs on this record that came together very spontaneously, with the rhythm section in the room, just playing. If it was just bass, drums and guitar jamming together in a room, those three people would get credit on the tune. ‘Don’t Know What It Means’ is a melody that J.J. [Johnson], our drummer, had. On one of the breaks, he was singing this melody to me, and said, ‘Help me put some changes to this.’ Then the band filtered back into the room, and we started piecing together different sections of the tune. 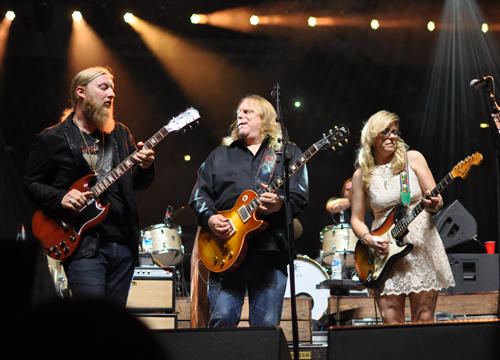 Once you feel like you have a song and a melody there, whoever is feeling inspired lyrically might branch off. It might be me and Mike, or me and Susan, or me and Mike and Susan working on a lyric. A lot of times the melody would dictate what the lyric would be about: ‘When you’re singing this melody, what does that feel like?’

It’s nice being in a group where people feel comfortable throwing out ideas. If it’s good, it sticks. If not, then you move on to the next thing. There were a few songs that were grooves that came up at a soundcheck. We’re getting good at it: wherever the inspiration comes, we just roll with it.

BK: Tedeschi Trucks Band is so much more than a vehicle for your guitar playing, or Susan’s guitar and voice. It’s a band in the most real sense. And that approach was a very big part of what made the Allman Brothers Band special, and I think that’s a big part of why that group endured for as long as it did, because of the focus on the group as opposed to one or two members. Was the Allman Brothers Band’s approach a guide for you as you put your own group together?

I feel like the music is more important when everybody is fully in it. I think you’re spot-on. That’s what made The Allman Brothers last so long: there was always this sense that it was greater than the sum of its parts. A lot of that was Duane’s spirit, and the way he went about it in the beginning. And it’s amazing how far that spark went with him.

That was the sentiment for this group from the very beginning, and I think it’s only gotten better and stronger as it has gone on. There’s a natural evolution of finding the right people, of making sure everybody’s pointing in the right direction. It takes time for those things to fully solidify, but it’s in a pretty great spot right now. 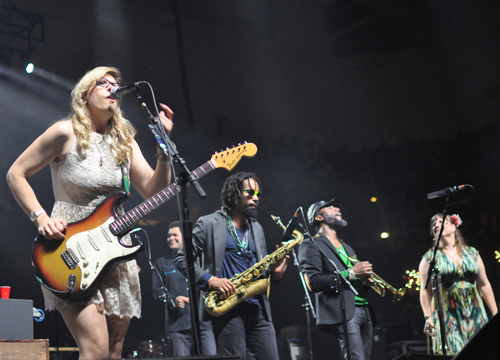 BK: Warren talked to me about playing in the shadow of Duane Allman. Did you ever feel that?

DT: I was excited to be playing that music; I was excited to honor his legacy in some ways. But I never felt boxed in. I always enjoyed quoting him a little bit, and making sure that sensibility was there. But I felt fully comfortable sort of leaving the reservation, going off in any direction that felt musically correct.

Warren and I came in at different times. Later on, I started feeling boxed in by the material, and the fact that maybe not everybody was feeling as musically ambitious as everybody else. But I always felt honored to keep Duane’s legacy rolling, to shine a light on it for a different generation that wasn’t as aware of him. 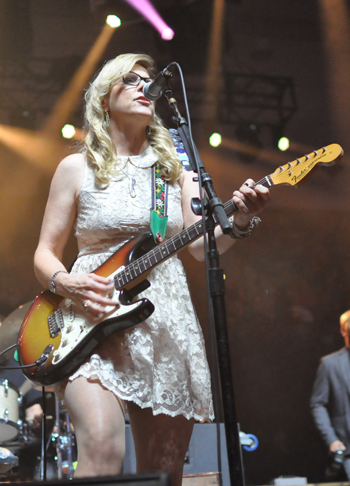 BK: On the new album Let Me Get By, “Don’t Know What it Means” has a great gospel break near the end. And “Right on Time” has a kind of New Orleans jazz vibe. When putting music together for the band, do you consciously seek to draw from a wide variety of styles?

DT: It’s a pretty organic process. With Susan and Mark [Rivers] – and even Alecia [Chakour] – there’s definitely a gospel sensibility in the way they go about things. Mark’s family is church: it’s Charleston, South Carolina old-school church; that’s where his wheelhouse is. There’s an inspired moment, and it just naturally goes there. And for Susan, Mahalia Jackson is as big an influence as anybody else for her. So that music is always right under the surface. As the band grows, we get more comfortable going into whatever moves us.

BK: Does leading the TTB scratch all of your musical itches?

DT: Maybe down the road I’ll have some other things I want to do that are outside of this. But I’m pretty fulfilled musically at this point with this group. I’ve never been in a musical situation that felt as good all the way around as this. There’s no limit to what we can do. So I don’t really have that urge.

For the first time in my adult life, I’m ready to put all of my energy into one group. Which is a pretty great feeling. And I think it shows. The band is in a great spot, hitting the road, and there are 4 or 5 nights in a row that are incredible and inspired. I think that only happens when you focus all your energy in one place. So I don’t want to break that. There’s a lot of talent on that stage, and there are a lot of things that we can still tap into. And there’s no ceiling in sight.