Quilt: A Collective of Individuals

Though the group has released three albums since 2011, Quilt has been together since late 2008. Formed in Boston by Shane Butler and Anna Fox Rochinski – then students at the School of the Museum of Fine Arts – the group grew out of the city’s do-it-yourself musical scene. “There was a very free-form DIY network,” says Butler. “It was so open that you could play with tons of different kinds of bands all the time.”

That wide-open musical approach informed Quilt’s own musical aesthetic. “It’s not that we were improvisational like a jazz group,” Butler emphasizes. “There was no intention behind our music. We just wanted to be a band.” They began to write songs, but with no particular style or musical approach in mind. “There was no need to tell ourselves what we were, what we were going to be, or what our songs were going to sound like,” he recalls. “We were able to figure that out, half at home and half in front of people.” 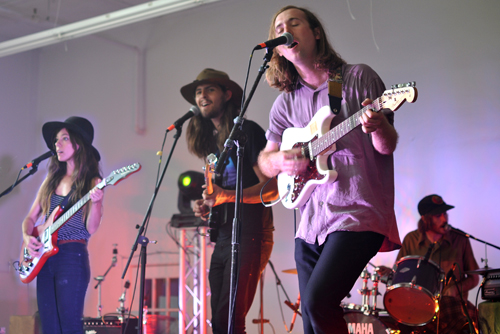 Butler remarks on the uniqueness of that DIY scene. “There will be nothing like it again,” he says, “and I feel very thankful for being around it.” The foundation those early days provided allowed Quilt to develop a musical approach that has served them well, as displayed on their third album, Plaza, released earlier this year.

The band’s freewheeling approach to music reveals itself in their multiple methods of songwriting. “It’s different for every single song,” Butler says. “Some songs, one of us will have it completely done before it’s brought to the band. Other songs are completely jammed out by the entire band. And some are a mixture, where we’ll add parts that someone wrote at home. Sometimes in the studio [a song] turns into a whole ‘nother thing. It’s always different, and I really like that. It’s not just one process.”

That fundamentally collaborative mindset may be part of the secret to the band’s longevity. Butler believes their approach “fully embrace[s] the nature of each member of the group as a member and as an individual. That’s a very, very cool thing,” he says. “And I’m happy to be in a band that has that. I’ve always been attracted to records that have multiple voices and songwriters; I think that’s rare.”

He notes that in their time together, the band members have become and remained really good friends. “Being together for 7 years now, everyone’s become much more talented musicians, and better writers,” he believes. “And in a group situation, you acknowledge that and ask yourselves, ‘Okay, so how can we honor and use those things?’”

Butler believes that Quilt’s touring has helped his own songwriting. “Whether it’s the thankfulness you have for being home and appreciating the simple things in life – cooking, seeing friends – or whether it’s the literal experience of being somewhere else, I find that touring has a really great effect on the creative process. I find that when you put yourself around different people, places and scenarios, you’re going to learn about things that you would have never known. Some are good, some are bad. You take what you will.”

Some critics have compared Quilt’s sound to “psych revival” bands. So does Quilt aim for a certain style? “We’ve never had a conversation about that kind of thing,” Butler laughs. “I am very, very interested in exploring a lot of different types of music, and I know that the band is as well. I think we’re all really interested in songwriting, harmony, and a mixture of electric, electronic and acoustic instruments. Sometimes when you have all of those elements together – especially when you play finger-picked guitar and sing harmonies, it’s going to get compared to the 60s vibe. I’m interested in exploring that, but at the same time I don’t feel too strong a need to make that sort of music.”

Not long ago the band was asked to perform on the late-night TV show Last Call with Carson Daly. Butler was delighted to appear on the show. “In this age, people are getting media from so many different sources,” he observes. “There are a lot of people who do not watch TV at all; they just watch things on their computer. And there are people who just watch TV. So Last Call gave us more exposure.”

He remarks on the homogeneity of much of the music in today’s pop mainstream, adding, “there’s nothing wrong with that. But if you’re gonna give them that, then please also give them something else. Because while maybe not everybody will like this other kind of music, some would. And some need it. So any chance that we have as artists – and I’m not saying that people need our music – to go on something like Last Call, we should do.”

Pittsburgh audiences have earned a special place in the hearts of the musicians in Quilt. The last time the band played locally, it was in the midst of a serious snowstorm. Butler recalls, “we were thinking, ‘Nobody’s gonna come to the show.’ But a bunch of kids came! They drove through the freakin’ snow where you could die. And they had a blast. And this does not happen in every city. There’s something really special about the dedication of our group of fans in Pittsburgh. And I hope that we see them again.”

An edited version of this feature was published previously in Pittsburgh City Paper.