Home  »  Americana • new release • rawk   »   The Yawpers: Chronicling the American Experience, One Character at a Time

The Yawpers: Chronicling the American Experience, One Character at a Time

“Hey, I’m sorry I missed your call,” says Nate Cook of the Yawpers. “I didn’t hear the phone; I was vacuuming.” He laughs when I suggest that activity is “not very rock ‘n’ roll,” but Cook is happy to get a brief domestic break from the group’s heavy touring schedule. It’s a brief respite, though: the Yawpers quickly hit the road again, crisscrossing the country before landing back – again briefly – in their Denver hometown to play a set at the Underground Music Festival.

The trio manages to breathe life into the acoustic-instruments-and-drums format, in part by writing better songs, and in part by using not one but two acoustic guitars. “We’re trying to play what we like,” says guitarist Nate Cook. “And a lot of what we like is the Cramps, Bruce Springsteen and R.L. Burnside. So just by virtue of what we enjoy, our music is a kind of punk/blues/Americana thing.” 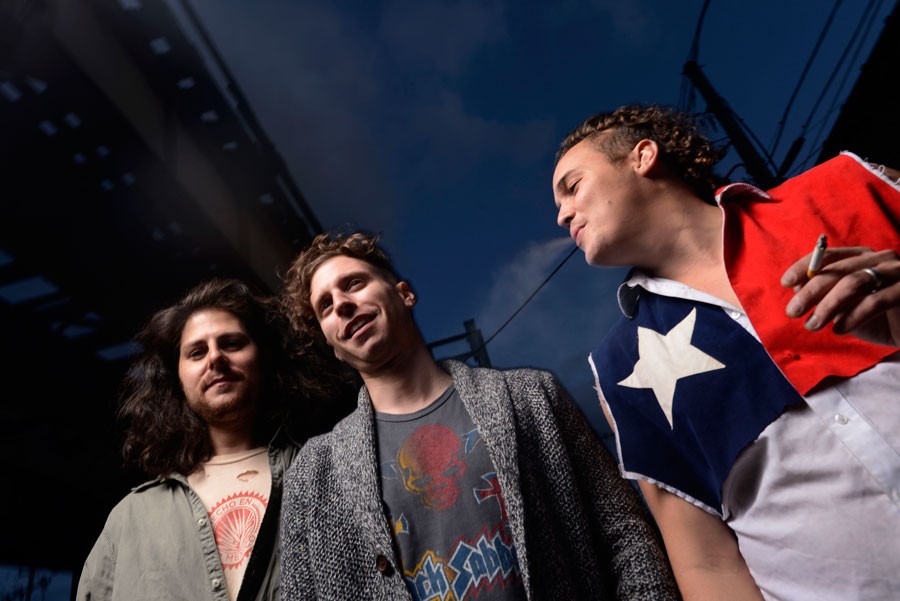 After a pair of self-released albums – 2012’s Capon Crusade and the 2013 all-covers set Good Songs/Shitty Versions – in 2015 the Yawpers signed with hip independent label Bloodshot Records. Cook acknowledges that signing has changed things for the band. “It does offer a bit of credibility, but primarily – and I struggle to use the word ‘exposure’ – I think our reach has grown so much. And that’s really allowed us to make a go at a career of it.”

As the band’s songwriter, Cook had ambitious goals for the songs that would make up their album, American Man. Each song would take on the perspective of someone from a specific American walk of life. The song titles more than hint at that approach: “9 to 5,” “Beale Street,” “Walter.” “Every song is supposed to be a kind of narrative independent of the other songs,” Cook explains. “They each weave into their own fabric of what the American experience is like.”

Cook pauses and laughs self-deprecatingly. “I kinda failed at that; a lot of the songs ended up being autobiographical. But that’s what I attempted to do. I pick characters that I don’t necessarily have anything to do with, and try to look at the American experience through their lives.”

Nate Cook and his band mates – slide guitarist Jess Parmet and drummer Noah Shomberg – honor their basic instrumental concept: “We have a formula,” Cook admits, “And we really don’t stray too far from it.” But in the studio, the Yawpers found that subtle shadings of other instruments helped give them the sound and feel they wanted.

“A painter gets tired of using black and white eventually,” Cook says. “Sometimes on our records, it’s fun to fool around with some different palettes and different sounds.” Hammond organ pops up on several American Man tracks, but – knowingly or unknowingly taking a cue from 1960s producer Phil Spector’s “wall of sound” approach – that organ is felt more than heard. “What carries live doesn’t necessarily carry on a record,” Cook explains.

But live onstage, the Yawpers remain true to their two-acoustic-guitars-and-a-drum-kit setup. And that’s what their hometown audience will see once the band drives home from the previous night’s gig in Omaha. The Yawpers are just one of more than 250 bands listed on the Underground Music Showcase’s 2016 lineup (“400+ performances,” claims the poster).

If Cook could spare the time, there are countless other bands on the UMS bill he’d like to check out. “If I had the opportunity, I’d really want to see Thee Oh Sees. And Dragondeer; they’re a great local band. There are a lot of great local bands I’d love to see. But,” he laughs, “We’ll barely make our sound check. So we’ll see whoever is on after us.”