Mamadou Kelly: “We Are Musicians. We Play Music.”

“The American blues form is foreign to us,” says Malian master guitarist Mamadou Kelly. That may come as a surprise to American audiences who hear in Kelly’s music a connection between his soulful approach and the American indigenous musical form born in the Mississippi Delta.

That purported connection between African music and the blues seemed clear when Mali’s most celebrated musician Ali Farka Touré released 1994’s Talking Timbuktu, a Grammy Award-winning collaborative project with American guitarist Ry Cooder. But Kelly – who studied under Touré – emphasizes that Malian traditional music does not conform to the blues. Though a translator, the French-speaking Kelly says, “We have a lot of different styles of music in Mali, but the ‘blues’ is not a word we use; that’s an American word. It was not something we thought too much about.” 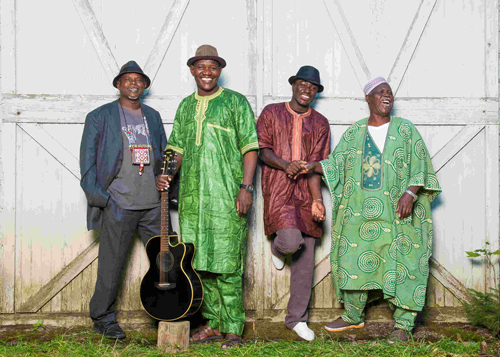 So what is it that Western ears hear that leads them toward making that connection? “Maybe it is the feeling and the rhythm that may have resonated with people,” Kelly suggests. “Maybe it’s a pre-blues kind of thing that hits people.”

Within the northwestern African country of Mali – a country of more than 15 million people – each region has its own cultural traditions, Kelly says. “However, we are all engaged in valuing cross-cultural expression while staying true to our own source.”

Born in 1969 in the Niger River Delta, Kelly went to study under Touré when he was only 17. “I grew up in a small town a short distance away from where he lived in Niafunke. As a teenager, I wanted to learn from him.” At first, Kelly learned to play the calabash, a gourd percussion instrument. He eventually learned guitar and several other instruments from Touré.

“I learned a lot from him,” Kelly says. “It was like a family there. There were a group of guys who hung out at his studio; we played all the time, learned the traditions and the songs, drank tea. We watched what he did. We practiced a lot. He was like our father or older brother: he scolded, encouraged.” Today, Kelly’s band Ban Kai Na includes members of the late Ali Farka Touré’s Allstars group.

In recent years, Mali has experienced internal strife including a Tuareg rebellion. Islamist forces in Mali are opposed to Kelly’s secular style of music. But Kelly – who lives in the north of the country with his wife and family – doesn’t write music that’s overtly political. “Our songs speak about the circumstances of our lives. Not specifically about politics, but the things of everyday life. We are musicians,” he emphasizes. “We play music.”

That music is sung completely in a language most Americans won’t understand. “There is always something lost when words are not understood,” Kelly acknowledges. “The language barrier is difficult sometimes.” But Kelly doesn’t believe this is a significant problem. “I try to give an idea about the songs when we perform. But I have found American audiences to be very gracious; I think they understand what we are saying through the music. The people are dancing, and so our music connects with them somehow.”

On Adibar, Kelly’s 2013 debut album, traditional instrumentation was used. 2015’s Djamila incorporated guest musicians on modern and/or Western instruments including organ, electric guitars and cello. “We were looking to stretch and modernize,” Kelly says. We grew up with Ali Farka Touré’s openness to experiment and discovery.”

Kelly emphasizes that “it is natural for us to invite people in to play. And we’ll be doing that again during this tour. We want to cross boundaries that divide people.” In between dates on their 19-stop 2016 American tour (which includes a date at the prestigious Kennedy Center in Washington DC), Kelly’s band has recording projects planned. “While we are in California, we will be recording in Los Angeles with a Jamaican band called Soul Syndicate. The idea is an afro-reggae collaboration. That is something new for us, and it should be a lot of fun.”

The band will also return to Area 52 Studios near Woodstock, New York, where Djamila was recorded. “We are going to bring in some new collaborators to add to the experience,” Kelly promises. “So far we have the great slide guitarist Cindy Cashdollar excited to join us in the studio, and we’ve been talking to a few other people as well. We continue to look for ways to stretch our sound and connect with people.”

Mamadou Kelly is excited about sharing his music with American audiences, and believes a special connection may develop with his Asheville audience. “Many people tell me that our music reminds them not only of American blues but also of American bluegrass music. We will bring a celebration to Asheville. We hope to win over Asheville audiences,” he says. “And then they’ll invite us back.”