“We wanted to make a record.” That may sound like the most obvious of statements for a recording artist to make, but David Bazan is trying to convey a deeper meaning when he says it. For him, a record is more than simply a collection of the last dozen or so songs he’s written; it’s a cohesive, sonically- and thematically linked work. Blanco is just such a record, and Bazan will perform that record – along with other tunes from his back catalog of various projects – on dates on his current tour.

The songs on Blanco began their life as part of Bazan Monthly, a direct-to-fans project that the multi-instrumentalist began in 2014. Subscribers received a new song once a month. Bazan says that ambitious project was pretty demanding: “Every month I had to turn in 2 songs for immediate release on the first of the next month.” After that two-year project came to a close, Bazan and his producer/collaborator Yuuki Mathews went though the collection with a goal of selecting tracks for a proper album. 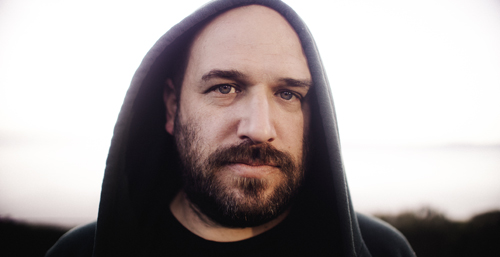 But the album would be more than a best-of of the Bazan Monthly tracks. “It happened in a pretty organic way,” Bazan says. “But it’s only in hindsight that I can make sense of the basic theme.” Bazan and Mathews each made a list of the ten songs they thought would work together sound- and production-wise.

In the end, some very good songs didn’t make the cut. “We compiled songs that we felt fit the best and made a complete record,” Bazan says. “I really wanted a song called ‘Impermanent Record’ to be on the album, but it didn’t fit tonally or thematically.” Once the songs were chosen, Bazan went back and remixed a few, occasionally adding instrumentation or vocals. “The way that the monthly project went, we were right up against the deadline every time. So some of it was that we just wanted another crack at a remix.”

“Translating the record to a solo live show has been kind of a squirrely process,” Bazan admits. “I had started preparation for the trip – and even a couple early shows on the tour – playing some synthesizers and drum triggers and things. And by 2 or 3 shows in, I realized, ‘That’s a good idea, but it’s not quite right.’ So I just migrated back over to the electric guitar, and now it’s really fun.”

On his current solo tour, Bazan has made the somewhat unusual decision to perform Blanco‘s songs in the exact order they appear on the record. “I’m playing the record every night, all the way through: 5 songs on Side A.” Those are followed by selections from his days with Pedro the Lion and Headphones, and then Side B of Blanco. “In doing that, I’m really able to meditate on the thematic flow of the record in a way that I hadn’t had a chance to do yet. That’s really wild and super cool. I’ve already worked out the sequence, and I really like it! And it’s working in the live setting, even with just an electric guitar and without all the other accoutrements that are on the record.”

Bazan has played in Asheville several times before, including some house concerts. “House show tours are just a little bit more civilized; you just have more time to sleep and collect your wits. It’s not so much of a go-go-go-go kind of life. With minimal setup, I’m able to have just as cathartic a time playing music for 70 or 80 minutes than I would with three hours of prep and hanging around. And there’s the bonus of a level of intimacy that you can’t get at a [club] venue. That’s pretty special.”

But Bazan doesn’t shy away from club dates like Asheville NC’s Grey Eagle show, one of 36 between late June and the end of August. “There is a set of muscles that playing in rock clubs utilizes, and they aren’t exactly the same” as the ones used for house concerts, he says. “And it’s really, really good to do both. I’m glad to be in rock clubs right now.”