Guided by Voices: A Study in Well-prepared Spontaneity

“When we go to sound check, he goes to record stores.” That’s how guitarist Bobby Bare Jr. begins his description of the preparations Guided by Voices leader Bob Pollard makes ahead of each show.

Since their 1983 start in Dayton, Ohio, through myriad lineup changes, across more than 20 albums and countless live shows, Guided by Voices has earned a reputation for unpredictability. But newly-recruited guitarist Bobby Bare Jr. explains that a good deal of preparation goes into the group’s high-energy performances. “The morning of the gig, Bob has the set list written and in his pocket. When we get done with sound check and he gets back from the record store, we have a two-hour hang that’s pretty much just the band. We sit around and wait for him to pull the set set list out of his pocket. Then we all take a picture of it on our iPhones.” At that point, each member makes his own annotated set list in preparation for the show. “It’s fifty songs every night,” Bare says. “And we go for it.”

But because this is Guided by Voices, there’s always an element of uncertainty. Bare recalls a night not long ago, when the new lineup was onstage in St. Louis, near the end of their second-ever show. “As we were walking out onto stage for the second encore, Bob said to us, ‘We’re gonna play “Baba O’Riley!”’” The thing is, the bass player [Mark Shue] didn’t know the chords to The Who‘s 1971 classic. “But I know it,” says Bare, “and Nick [Mitchell, guitar] and Kevin [March, drums] know it. So I stood with my back facing the audience, just screaming the chords at the bass player. It was a blast!” 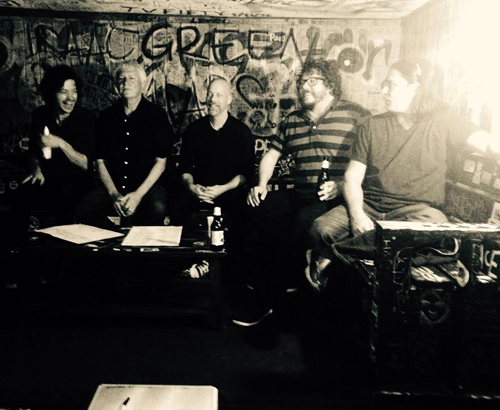 “That was pretty crazy,” Bare laughs. “But in general, Bob wants us to be very, very prepared.” For this tour, that meant learning literally dozens of songs, including some that no GBV lineup has ever played live onstage. “I’ve never been in someone else’s band before,” says Bare, who has a thriving career of his own. He’s released eight albums, carrying on the family tradition begun by his father in the 1950s.

“I’ve never had to learn other people’s music, except for a couple covers,” says Bare Jr. “I only ever had to learn songs that I created myself. So I had a lot of learning. We got our set list of things to learn in January, and I had gigs [of my own] up until March. We had our first rehearsal the end of April or [beginning of] May. I had learned half of the songs, but for the other half I had to take a trip to Ohio just to learn and chart the songs. Then I went to New York to rehearse them with the bass player and drummer.”

As a songwriter himself, Bare holds other composers to a high standard. And he ranks Bob Pollard among his favorites. Pollard is said to have written more than 1,600 songs; Guided by Voices has released more than 500 of his tunes. Bare rates Pollard’s melodic sense as his greatest asset. “The hardest thing to do in a band is to have a sense of melody and phrasing,” says Bare. “It’s the thing you can’t learn or teach; it’s just this innate thing. And Bob’s so good at it.”

“That’s what I like most about Bob’s music,” says Bare. “But what I love the most is how hard it rocks, how amazingly heavy these pop songs are.” Another Guided by Voices trademark is the relative brevity of the group’s songs; many clock in well under three minutes. Bare wouldn’t mind if Pollard extended some of the tunes, but he’s clear: “It ain’t my gig. Bob doesn’t tell me how to do my songs; who am I to step in and tell someone I admire what to do? It’s not my band; it’s his. And I’d be crazy to walk into such a beautiful work environment and try to change things around; that would be just stupid. I’m a fan of the band; why would I try to mess with things?”

If all this makes it sound as if Bobby Bare Jr. is a Guided by Voices superfan, he’ll readily admit that’s the case. “When you stumble upon Guided by Voices, it just blows your mind,” he says. Bare discovered the band’s music in the late 1990s. “And since then, I’ve gone to every show I can get to.” As a solo artist, Bare was invited to open for GBV on their last tour. “When I found out, I started screaming and jumping up and down,” he laughs. “My kids thought I was crazy! It was such the perfect tour for me to be on, and it worked out great.” Bare became good friends with Pollard. “So when they needed a guitar player, they just thought, ‘Why don’t we ask Bobby?’”

Bob Pollard recorded the most recent GBV album, 2016’s Please Be Honest, completely on his own. He’s on record as saying that Guided by Voices is Bob Pollard. With the frequent lineup changes – there are now more than 16 ex-members of the band – one can never be too sure what tomorrow will bring for Guided by Voices. “I keep my fingers crossed all the time,” admits Bare. “You never know. But I also know that if we just keep giving Bob a safe area to do his thing, everything’s gonna be fine. Because he wants to play; he wants to rock. He loves to do his thing; we’re just lucky enough to be there providing it. I’m just one of the audience who happens to be lucky enough to be onstage. Because if I wasn’t onstage, I’d be in the audience … singing along to every song.”