“There’s a place on Interstate 40 eastbound, just on the east side of Knoxville, where you come around this curve,” says guitarist/singer/songwriter Bryan Sutton. “Suddenly the whole horizon is an expanse: the leading edge of the Blue Ridge shows up. And it’s always been a thing that I look forward to on the trip.” Sutton’s fond feelings evoked by that frequently-repeated experience are expressed in the first verse of “Hills for the Head,” a standout track on The More I Learn, released June 3.

Sutton notes that there are a few hills around Nashville, the city in which he has lived and worked since 1993. But the Asheville native says, “I’ve always been drawn to mountain terrain. So that verse in ‘Hills for the Head’ came out of wanting to tell my story as it is currently. I do like to get back to Asheville. I don’t live there any more, but … I’m still a resident in some sense. I get a lot out of returning, seeing family and friends. I still feel connected.” 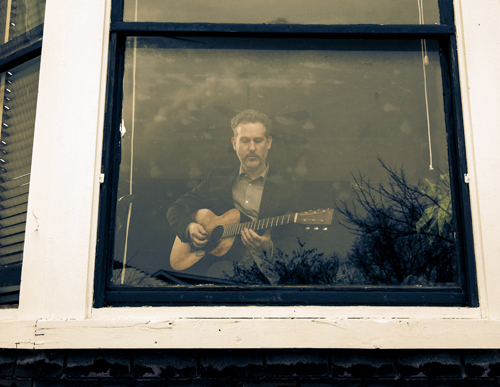 The nine-time IBMA Guitar Player of the Year built his reputation as a studio guitarist, playing on sessions for a long list of country, bluegrass and roots artists. “Part of the gun-for-hire, session player skill set is to be a little bit of a chameleon,” Sutton says. But on each of his six solo albums, he’s made decisive step after step to expand and assert his own musical voice. 2014’s Into My Own found Sutton – who up to that point had worked primarily as an instrumentalist – adding his own lead vocals to the mix. The More I Learn is an even more assured display of his multifarious talents: in addition to playing guitar, Sutton produced the album, and wrote or co-wrote 7 of its 13 tunes.

Singing on the new album was “part of a process of getting more comfortable, getting better,” Sutton says. “And then getting more comfortable because I’m getting better. I’m trying to write more songs that I can sing and feel confident about, so it’s not just me vocalizing on a song; it’s actually an idea and an emotion that I have in mind. I have a sense of ownership of what I’m singing about, and that helps the whole process. And that’s all really new for me.”

Sutton’s experience includes years of playing with the likes of Doc Watson, Ricky Skaggs, Sam Bush and others, in addition to being a member of legendary bluegrass group Hot Rize. “After years of playing with characters like that,” he says, “it challenges me to be better. It challenges me to dig into figuring out what it is that I do. I ask myself: what is it about their musicianship that appeals to me? [I look for] the essence of whomever I’m around. If I’m really intrigued by that, and want more of it, I try to figure out how to create that for myself.”

While Sutton seeks to entertain his listeners, the process of making albums has as much to do with challenging himself. In making The More I Learn, “the overarching energy was to do a lot of things that were basically new.” Sutton chose a number of old-time and traditional songs that gave him the opportunity to do some serious solo flatpicking on guitar. “It’s a real challenge: spell out the chords, spell out the melody. And I embrace that [approach] with those particular tunes.”

On previous albums, Sutton enlisted the help of his many friends and associates from Nashville and elsewhere. Those records, he says, “had huge casts of people, kind of an all-star thing. And most of the records I’ve made have felt temporary because of that.” With his latest album, Sutton has decided to focus his energy on using “the guys who I’ve been playing with on the road for the last year, with the addition of [Punch Brothers banjo player] Noam Pikelny.” The albums prior to The More I Learn were “nice recordings, nice projects,” he says. “But now my goal is to really capture that energy of stage performance. And I really feel like we’re doing that.”