There’s something for most every musical taste during Brevard Music Center‘s 2016 season. Less than an hour’s drive southwest from Asheville, the center not only mounts an impressive array of performances, but centers all its activities around the teaching of more than 425 students in classical symphony, opera, chamber music and other disciplines. “We’re both a music institute and a summer festival,” says Cally Jamis Vennare, BMC’s Director of Marketing & Communications. “We are all about our mission, which is to train these students, who come in from all over the country if not the world. They’re the next generation of musicians and singers.”

The Brevard Music Center’s season usually lasts 7 weeks, but this year things started early, with the June 3-4 Brevard Blues N’ BBQ Festival. While the center’s primary focus leans toward the finer musical arts, the overall program is intentionally eclectic. “We want to provide diversity in what our students and our audiences hear,” says Vennare. “We want to expose them to classical, but we also try to bring in diverse audiences with sets featuring pop, gospel, blues, and bluegrass.” 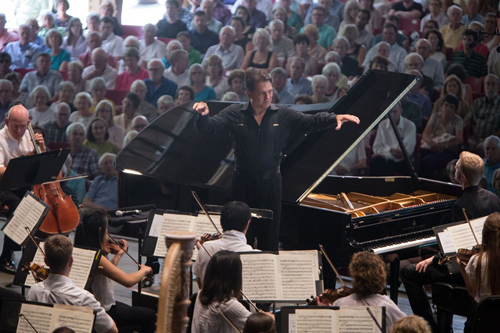 The summer schedule also includes the world premiere of Falling Angel, a new “opera noir.” Vennare describes the collaboration with New York City’s Center for Contemporary Opera as “the culmination of a multi-year process. We did read-through workshops in New York, we did a “black box” [minimal, small-space] production last year in Brevard, and this year we’re doing a fully-staged production at the Porter Center.” Calling the modern opera “edgy,” Vennare says, “It’s not a ‘Magic Flute’-type piece.” (Mozart’s ‘The Magic Flute’ will be staged July 14.)

The BMC 2016 season offers everything from full-orchestra performances at the indoor Porter Center and the open-air Whittington-Pfohl Auditorium to several smaller, more intimate venues on the BMC campus. Vennare notes that fully 50% of the performances are free and open to the general public. And low-cost options exist for some of the pricier shows: lawn tickets at WPA shows start at $15, with free admission for kids.

Some major musical talents received important training early in their careers at BMC. And for the anniversary season, the Center is bringing back some of those distinguished alumni. “We’re reaching out to our alumni – conductors, composers, musicians and singers – in a way we never have before, inviting them to come back here and celebrate the season with us,” says Vennare.

Plans for the celebratory season began some time ago. One of the changes return concertgoers will note is the improved sound at the 1800-seat Whittington-Pfohl Auditorium. In addition to covering the orchestra pit, thus moving the music closer to the audience, BMC has done what Vennare calls an “acoustic enhancement.” That project – installation of mobile, modular panels to improve musicians’ ability to hear one another – is part of a larger $2 million project for improving staging, renovating the band shell, and making additional technology upgrades related to rigging and LED lighting.

The entire summer schedule at Brevard Music Center aims to combine education with entertainment. One example is the Dvořák in America Festival, featuring multiple events and culminating in a July 30 performance of the composer’s New World Symphony. The Dvořák festival will be curated by Joseph Horowitz, a prominent and widely-published author on American music, and will also include a string quartet and a recital. “All of those elements are part and parcel of the Dvorak festival, which will also include lectures and pre-performance talks,” says Vennare. “The idea is to help the audience understand what they will be experiencing. It’s also a great learning experience for our students, because it puts into context for them what the composer was experiencing, and how that influenced his composition.”