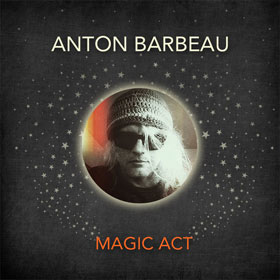 Often swimming in the quirkier end of the power pop pool, the prolific Anton Barbeau most recently made a pair of albums fronting Three Minute Tease; there he applied his own personal spin to the music, bending the sound made by Robyn Hitchcock‘s former band mates (Andy Metcalfe, Morris Windsor) toward his own unique aesthetic. Magic Act is more of an assortment, with solo-made tracks alongside tunes featuring Metcalfe, Windsor, XTC‘s Colin Moulding, The Corner Laughers‘ Karla Kane and other like-minded musicians. After Antronica, his delightful 2014 side trip into krautrock electronica, Magic Act finds the Sacramento native (now based in old East Berlin) putting his melodic skills on brilliant display. The musical polymath’s adventurousness – plus an ever-present psychedelic haze – informs all twelve tracks, but Barbeau’s inerrant knack for tunefulness makes Magic Act supremely accessible. And that’s the cleverest trick of all.