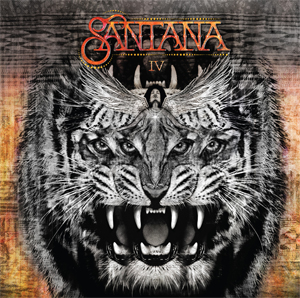 After decades of spotty, sometimes less-than-inspired albums (not to mention underwhelming guest spots and collaborations), Carlos Santana has reassembled most of his Woodstock-era band’s lineup to create an album that picks up right where they left off in 1971. The Latin/African vibe key to Santana’s appeal is vibrant and alive throughout Santana IV. “Anywhere You Want to Go” sounds like a lost tune from 1971. The group often channels that bygone era: parts of “Yambu” suggest Led Zeppelin’s “Whole Lotta Love.” Throughout, the guitars of Santana and Neal Schon are on fire, and Michael Shrieve‘s brutal yet finessed drumming is at the heart of all the songs. Greg Rolie‘s organ, piano and vocals sound and feel familiar in the best possible way, and Karl Perazzo does an admirable job of evoking the original group’s peerless percussion. Thomas Wolfe be damned: sometimes you can go home again.