It had been nearly five years since Swedish “folkrockpsych” band (their description) Dungen last played in Asheville. On that September 2010 date, the four-piece was touring in support of their seventh album, Skit I allt. In the ensuing years, Dungen went quiet, fueling speculation that they had disbanded. Guitarist Reine Fiske had already started another band, The Amazing; their debut album was released in 2009. (As luck would have it, an advance copy of The Amazing’s fourth album, Ambulance, landed on my desk just last week. It’s due out July 22.)

Meanwhile, Dungen’s website went literally years without a single despatch from the band. After an unbroken of critically-acclaimed albums that continued to explore the connections between free jazz, late-sixties European folk and hard rock, had Gustav Estjes decided to move on to other things? 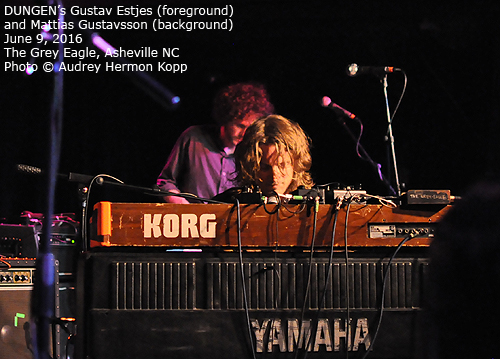 Those who dug a bit could discover that like Fiske, Estjes was involved in another musical project: in 2013 he appeared on an EP (imaginatively titled EP) by a group calling itself Amason (that’s “Amazon” in English). The pop-leaning Amason has since released a few more EPs, and a full-length album (Sky City) in 2016. Unlike Dungen, the group’s music often features English-language vocals (though not when Estjes sings).

Dungen fans were finally rewarded with a new album (Allas Sak) in 2015. That disc showed that Estjes, Fiske and their band mates Johan Holmegard (drums) and bassist Mattias Gustavsson still had plenty of solid musical ideas. But the year came and went without word of a major tour: aside from nine October dates in major American cities, there was no proper tour.

So the news in 2016 that Dungen would mount a tour of the USA was met with enthusiasm. With a lineup unchanged from previous Asheville dates, Dungen returned to the Grey Eagle on Thursday, June 9. 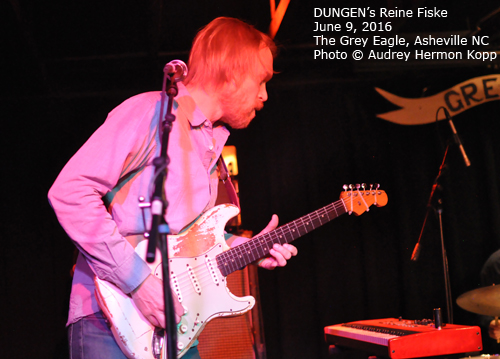 After a tepidly-received warmup set from Athens GA-based Mt. Moriah, Dungen took the stage. Both Fiske and Estjes made a point of conveying their heartfelt pleasure at being in Asheville again. On the band’s last date here, Estjes took a good bit of time between songs to good-naturedly discuss some stomach issues he had been experiencing, and extolled the virtues of a new discovery, locally-brewed kombucha.

This time around, Estjes didn’t seem to be having any such problems. The band’s setup differed only slightly from past performances: unlike the 2010 show in which Estjes spent a good portion of his time onstage playing acoustic or electric guitar, on this night he spent the majority of the show seated at his keyboards: an old-school electric piano and a slimmed-down organ module. Notably, he did keep a standing-level mic nearby for in-between-song comments and thank-yous. A number of songs featured Estjes on wooden or metal flute, too. Only for the group’s extended-piece encore did he pick up an electric guitar.

The guitar duties, of course, were more than capably handled by Reine Fiske. Using a relatively small arsenal of pedals and a single Strat-style guitar (with no backup axe in sight), he coaxed distorted and feedback-laden (yet highly melodic) lines out of his guitar the entire evening. Unlike the 2010 show, during which he spent significant time with his back to the audience (better to generate the right amount of organic feedback from his amplifier stack), on this night Fiske was much more engaged with the energized crowd. 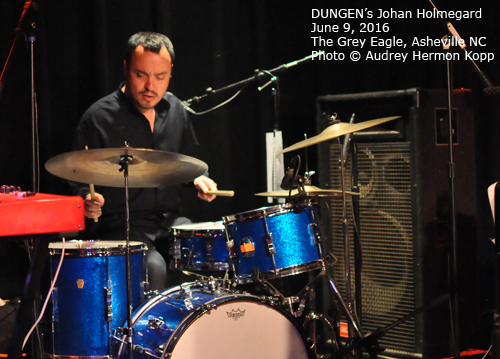 And as good as Dungen’s vocal work has always been, the band as a whole seemed less tentative, more confident as they took on the multi-part vocal lines of songs from Allas Sak and the other discs in the group’s catalog.

As always, the band’s rhythm section could be counted on to provide stellar support; Holmegard’s drumming has always betrayed a jazz sensibility, and that nuanced yet powerful style of playing is an important part of the mix that makes Dungen’s music special.

The group’s set was relatively brief – about 90 minutes – but as they wrapped, Estjes made a point to invite concertgoers to meet up with the band afterwards. That time would be brief, as Dungen was committed to getting on the road by 6am the following morning, when they would make the trip to Manchester TN for this year’s Bonnaroo festival.