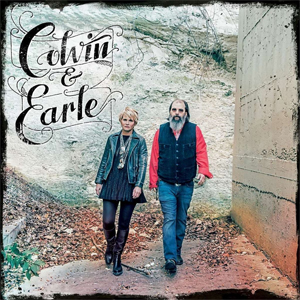 Though they both have thriving and creatively satisfying musical careers of their own, singer/songwriter/musicians Steve Earle and Shawn Colvin recently decided to work together on an album; Colvin & Earle will be released June 10. The longtime friends have also scheduled a tour in support of the album: kicking off June 4 in Pueblo, the tour will take the duo to 32 venues in about 15 weeks.

Teaming up was Colvin’s idea. About four years ago, she did some duo gigs with Mary Chapin Carpenter. “I had a great time,” Colvin says. “After that was over and we returned to our solo careers, I started to think of who else would be a good pairing.” She had long been an admirer of Steve Earle’s songwriting, which she discovered on hearing his 1986 debut album Guitar Town. “ Steve can write very seemingly simple songs, but they’re often much more complicated than they appear to be,” Colvin says. She asked Earle if he would be interested in collaborating, and he quickly agreed.

By necessity, the project would have to be brief, Colvin says, “because we all have our own work to do.” In fact the entire Colvin & Earle album was recorded in about ten days. “It was very impromptu, very ‘live,’” Colvin says. Spontaneity was highly valued during the sessions; that’s a quality that Colvin says she’s only developed over time.

On her first 2 or 3 records, Colvin says that “we put ourselves under the microscope. We wanted perfection; we wanted everything to be just right. I think it worked to a degree, but those records were not that spontaneous.” These days Colvin believes that “when you can play and sing, there’s no reason not to be spontaneous. I learned that the mistakes are sometimes as important as the perfect moments.”

The new album features ten songs: six co-written by the duo, and four covers. “We consciously wrote every song and learned every cover, just the two of us playing in a room,” Colvin says. “And it worked that way. We made sure that each song could be dynamic enough, full enough, or not-full-enough, depending on the needs of the song.”

Colvin and Earle each selected two songs written by others, and brought those to the project. “I had been listening to the 60s channel on Sirius XM and heard the Nashville Teens‘ version of ‘Tobacco Road,’ and I just thought it would be a great song for us to do,” says Colvin. She also selected Emmylou Harris‘ “Raise the Dead.” “I thought that would be a good song for a man and woman to sing together, to each other,” she says.

Though Colvin is and accomplished songwriter – her 1998 composition “Sunny Came Home” won two Grammy Awards and reached #7 on the Billboard Hot 100 chart – she notes that covers have always been part of her repertoire. Her most recent solo album, 2015’s Uncovered, is her second collection of other artists’ songs. Colvin says that when she started out, “I didn’t write for a long time. I was a reluctant, frightened, ill-confident writer, and I made my living doing covers in bars.” As she developed her own voice and style, Colvin says that she “branched out and started doing covers that were less expected.”