Bo-Keys producer/bandleader Scott Bomar says that the bulk of the work on Heartaches by the Number took the form of pre-production. “I spent well over a year compiling songs – covers and originals – for the record,” Bomar says. The result is a rich collection of weepers: crying-in-your-beer tunes, all given a soulful Bo-Keys reading that places them smack between country & western and Memphis soul. “I had close to 75 songs under consideration,” he says. Bomar worked closely with Percy Wiggins to select the 10 songs with which the vocalist would be most comfortable. 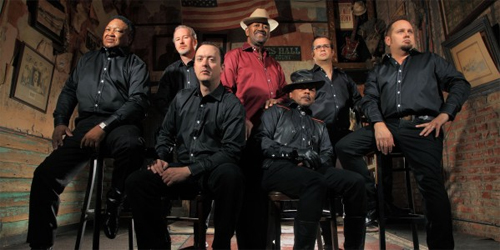 Heartaches by the Numbers‘ country-soul aesthetic was baked into the concept from its conception. “It’s essentially The Bo-Keys’ take on country music,” Bomar explains. “I’ve always loved old country; I grew up with it.” Bomar notes that people sometimes ask, “’What’s the ‘Memphis sound?’ To me – and I’ve lived here my entire life – it’s all the musical influences that happen here. You have blues, soul and gospel, but you also have country.” He recalls listening to local AM radio in the late 1970s: “I would hear ‘Soul Finger’ by The Bar-kays, and the next thing I’d hear might be Elvis, or Charlie Rich, or Jerry Lee Lewis.” He notes that jukeboxes in Memphis bars have “Green Onions” alongside 45s by George Jones. And Heartaches by the Numbers is a successful effort that combines those various flavors into a modern-day Memphis soul stew (as it were).

In narrowing the choices to 10 songs, some great tunes went by the wayside. But Bomar covered the bases he wanted to cover. “I wanted to have a Merle Haggard song and a Willie Nelson song,” he says. “ I wanted to hit certain artists; we got close, but we didn’t get to everybody we wanted. Maybe we’ll have to do another record!”

The Bo-Keys have a live show scheduled mere days from now (June 16 at Memphis’ Levitt Shell on Overton Park); at present, that’s the only live date on the group’s schedule. “We’re going to do as much as we can,” Bomar says. Some of the group members are veteran musicians well into their 70s: Wiggins, Howard Grimes, and Archie “Hubby” Turner. But touring isn’t necessarily practical even for the younger members of the band. “Even we’re not very younger any more,” Bomar chuckles. “Even I don’t always have the energy to do some of the stuff we used to do.”

The band did a three-night residency at Antone’s in Austin TX last spring, and most of the Bo-Keys are busy with other musical activities as well. “Our horn players play with Gregg Allman; I’m pretty busy with the studio. And Joe Restivo is probably the top ‘call’ guitar player in Memphis; he probably works every night, if not two gigs a night in Memphis when we’re not on the road.”

Bomar is happy with the way Heartaches by the Number turned out; he cites the group’s reading of “Set Me Free” and the Merle Haggard cover as the tracks closest to his sonic goal. “Percy and I worked up the songs with me on acoustic guitar,” he says. “But when we brought the songs in to the rest of the band, they all had different ideas. Particularly Howard Grimes and Archie Turner; they kept saying, ‘We gotta funk this up!’ So that’s what we did.” The final product reflects the combined character of the multi-generational group.

The country-soul focus of Heartaches by the Number displays a particular set of The Bo-Keys’ skills, but it only represents one side of the group. “We started off as an instrumental band,” Bomar notes. “When we did Got to Get Back!, [2011], that was us starting to put in vocal material; we started to think about songwriting a little more.” the new album continues that trend of learning from their influences. “You can take a Willie Nelson song and record it in any genre,” Bomar says. “When you study those great songwriters, you can do anything with their songs.” He characterizes Heartaches by the Number as the group’s “exploration into classic songwriting.”

Scott Bomar has a deep appreciation for the involvement of the older members of the group. “Playing with Percy and Howard and Archie….it’s like a history lesson every time,” he says. “When Howard Grimes came to the band, he immediately understood what we were trying to do.” Fans of classic country and classic soul who give a listen to Heartaches by the Number (available now on CD and digital from Omnivore Recordings, and on vinyl from Electraphonic Recording) will understand, too.