The Digs: Travel to the Beat of a Different Drum

“We’re pulling from a lot of places at once, trying to create our own thing,” says Ram Mandelkorn, guitarist and songwriter for Asheville-based soul/jazz/funk outfit The Digs. “And we’re getting closer to it.” The instrumental group features a unique lineup: guitar plus a keyboardist who plays bass lines with his left hand, and a rotating roster of three drummers. The Digs debuted their self-titled debut release at Asheville NC’s Isis Restaurant & Music Hall May 27.

Mandelkorn and co-composer/keyboardist Simon Thomas George draw from a wide array of influences including Wes Montgomery, John Scofield, Derek Trucks, Robert Glasper and Herbie Hancock. The resulting music appeals to the jam band crowd, but Mandelkorn says, “I don’t think we’re consciously aiming for that; we’re just trying to create music we love. And hopefully other people will love it.” 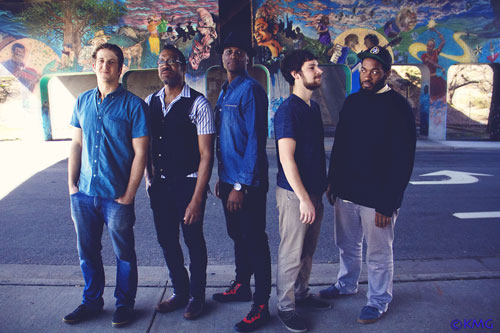 The guitarist and keyboardist/bassist met under unusual circumstances. “We got hooked up at Ben’s Tune Up playing live band karaoke,” Mandelkorn laughs. “That’s how we got our vibe of playing together; Simon started playing left-hand bass at the same time, and that created part of our sound.”

All three drummers appear on The Digs. Mandelkorn says that fact is “a theme of our album, and it’s helped each song have its own vibe or feeling. Each drummer brings his own character to the music.” Asked if the different drummers affect the way in which he and Simon Thomas George play their instruments, Mandelkorn is unequivocal: “On hundred percent,” he says.

As far as live gigs, it’s often a question of which of the three drummers is available on a given night. “But at the CD release, I’m pretty sure all three of those guys are going to be here,” Mandelkorn says. “That’ll be unique; we’ve never actually done that.”

The group’s songs were partly written before the band entered the studio. But when the musicians got together at The Eagle Room in Weaverville NC with producer Matt Williams, “we really figured it out in the studio,” says Mandelkorn. “It’s one of those things where you create it first, and then you look back at it and realize what you were doing. You realize it after the fact.”

While the studio versions of the group’s songs are tightly-constructed pieces, live onstage the group loosens things up a bit. “Some songs have other parts involved, or develop the melody even further. They’re not stuck to how they appear on the album,” Mandelkorn says.

The jazz-inflected tunes have the undercurrent of funk, with a strong melody that keeps things rooted in a pop sensibility. “That balance is definitely important,” Mandelkorn says. “We want it to groove, and we want it to be heady.” He characterizes the music on The Digs as “us exploring some sounds that we’re hoping to develop further. I think we’re still figuring out our sound; we have a bunch of different directions that we’d like to go, and we think we can do it all.”