The Honeycutters: Creating Quite a Buzz

“I write a lot of songs,” admits Amanda Platt, leader and songwriter of Asheville-based roots group the Honeycutters. “I’m a very prolific writer; sometimes I wish I could turn it off for a little bit. So I don’t think there’s ever going to be a shortage of songs to choose from.” The best songs among Platt’s prodigious recent output are collected on the Honeycutters’ fourth album, On the Ropes. The group played two very different CD release celebration shows at ISIS Restaurant & Music Hall on May 20 and 21. 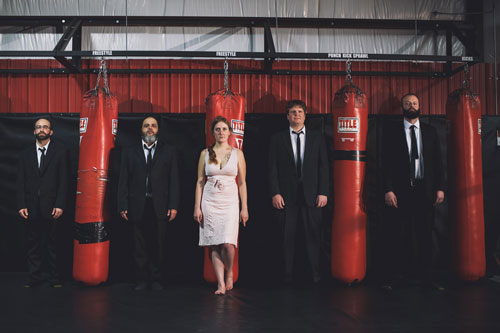 With so much material, Platt easily could have gone the solo artist route, but that doesn’t interest her. “I’ve always enjoyed being in a band,” she says. “And now more than ever, we are a band. I write the songs and I bring them to the group, but from then on, we’re very collaborative.” While her country-flavored songs almost always tell a story, the Honeycutters’ musical approach adds a dimension to the tunes that only widens their appeal. “I think if we were just focused on the lyrics, it would be a very different project,” she says.

Platt believes that the give-and-take of the band experience makes the resulting songs better. “There’s a lot of exchange of energy,” she says. On the Ropes has it both ways: it’s true to the country music aesthetic (“that cliché of ‘three chords and the truth,” Platt says), but it still appeals to an audience outside the c&w world. “Maybe this album is a little bit more catchy and a little more mainstream production-wise,” Platt observes. “I don’t know that that’s something we were necessarily going for, or something we’ll continue to go for. But it’s what turned out this time around.”

Nonetheless, co-producing with Tim Surrett at Crossroad Studio in Arden, Platt had definite ideas about the songs. “I know how I want things to sound,” she says, admitting with a laugh that “in terms of what exactly needs to happen to make it that way, I don’t know.” She collaborated closely with Surrett, engineer Van Atkins, and her Honeycutters band mates (Rick Cooper on electric and upright bass, drummer/vocalist Josh Milligan, Matt Smith on pedal steel and electric guitar, and mandolin player Tal Taylor).

For On the Ropes , I made the band a little demo of 16 or 18 songs, just me and my guitar,” Platt says. The guys in the Honeycutters listened, made notes, and then gave Platt feedback as to which songs they though were best for the album. “I think if it was just me and I had to make all those decisions, I would get more psyched out about it,” she says. Creative input from her band mates “gives me the extra push, that extra energy.”

Many of the songs on the new album are filled with sadness, regret and melancholy, but those qualities aren’t necessarily reflective of Platt’s day-to-day mindset. “A fan recently said to me, ‘You write a lot of songs about heartache and a lot of bad stuff like that. Are you miserable all the time?’ And I’m not miserable! Especially for the last year; I’ve been in a really great relationship, and I’m very much in love.” Noting that she finds inspiration everywhere, Platt observes that “You still get the blues, even if you’re a happy person.”

Platt refers to the other members of the Honeycutters as “the guys.” In part, that’s to differentiate from her other group, Sweet Claudette (“the girls”). When she writes songs, they might end up with one or the other group, or both. “Jukebox,” a spotlight track from the Honeycutters’ third album Oh Me Oh My , is just such an example. She first took the tune to Sweet Claudette; not long afterward at an open mic night at The Bywater, her band mate Dulci Ellenberger sang it. Bassist Cooper was there, and suggested that the Honeycutters do it, too. “So the girls like to make fun of me a little bit: ‘Yeah, the Honeycutters need to stop stealing our songs!’”

When the Honeycutters booked their ISIS dates, they scheduled a seated show and a standing one. “We have a very diverse fan base,” Platt explains. “Some fans want to come to the show, sit down and listen. Maybe they’ll have a glass of wine or a beer, and then just really be quiet and enjoy the show.” The Friday show is for those fans; Saturday night will be different. “We also have fans who are … maybe a little bit more rowdy. They want to dance, they want to drink. They want to sing along. So while Friday night will be a more intimate, formal affair, Saturday night’s going to be a little more balls-to-the-wall.”