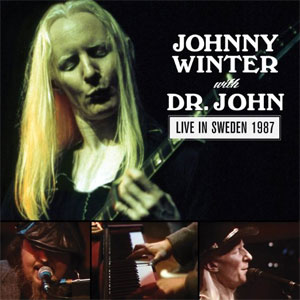 There are countless recordings of Johnny Winter live onstage; they all exist at various points on the spectrum of legitimacy. A new archival release, Johnny Winter with Dr. John – Live in Sweden has a number of things to recommend it. The recording dates from near the end of Winter’s time on Alligator Records, a period in which (though he may still have been battling his own personal demons) he made some fine, genre-focused music.

Winter and his rhythm section take a leaf from the jazz playbook and slyly insert licks (and sometimes more) from other tunes into their songs, providing a small but telling window into some of the influences that informed Winter’s playing in the late 1980s. Despite what the track listings note, the first minute and a half of the opening track sounds suspiciously like Stevie Ray Vaughan‘s 1984 tune “Scuttle Buttin'”. Eventually the tune segues into Winter’s own “Sound the Bell.” “Don’t Take Advantage of Me” quotes Cream‘s “Sunshine of Your Love” at last three times. Bassist John Paris and drummer Tom Compton hold down a rock-solid foundation, allowing Winter to spin out nearly endless soloing, with the occasional detour into a bit of lyrics here and there.

Dr. John (Mac Rebbenack) does indeed feature on this set, but it’s a good while before he makes his initial appearance, and when he does, he waits halfway into “You Lie Too Much” to take a solo. This being the 1980s and all, the piano he’s playing sounds suspiciously like a Yamaha CP-70, a notoriously metallic-sounding instrument that (unintentionally, to be sure) has a sound redolent of a tack piano. The good doctor’s vocals are a treat, though, with Winter occasionally shouting along enthusiastic encouragement. On the negative side, with Johnny and Dr. John doing their thing, there’s quite little left for Paris and Compton to do other than chug alongside the runaway train.

Happily, the same isn’t true of Muddy Waters‘ “Sugar Sweet,” wherein Paris gets a chance to show off his blues harp skills (though he has to do so under Dr. John’s out-front lead vocal). The band boogies effectively here, and in fact it’s Winter who’s left with nothing much to do until the tune’s three-minute mark. At that point, it’s a free-for-all with Winter, Paris and Dr. John all giving it all they’ve got.

The slow blues of “Love Life & Money” gives everyone involved a chance to stretch out; the tune is primarily a showcase for Dr. John’s soulful vocals and (of course) plenty of soloing on piano and guitar. It’s and all-in, arena-rock approach for the set closer, Winter’s popular reading of the Rolling Stones‘ “Jumpin’ Jack Flash.” The song had long been in Winter’s repertoire, and he always made the most of it, with the band hard-charging while he played with as much fire and fury as he could muster (which, in 1987, was still quite a lot indeed).

The source for this recording is (apparently) the audio feed from a television broadcast; the fidelity and mix are both quite professional-sounding, without the brittle character so often a characteristic of TV recordings. (Note that while MVD has released this title on DVD as well, my review copy is a CD, so I’m not commenting on the video.)

The packaging in minimal in the extreme: No liner notes, and some stock photography for the cover that draws upon images of Winter (and Dr. John) that are most assuredly not from the era in which this recording was made. Still, the mention of Paul Nelson – Winter’s second guitarist and manager during the last years of his life – on the back-cover credits means that (on some level, at least) this is an officially-sanctioned release. After decades of seeing his work exploited by others with little or no recompense to himself, with this album, the late Winter gets a kind of respect he always deserved but rarely got.