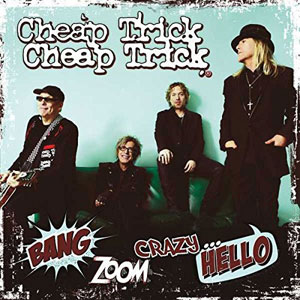 File next to: The Move, Boston, Fountains of Wayne

With Bang, Zoom, Crazy… Hello, the Rockford, Illinois, foursome Cheap Trick sticks to what they know: anthemic, melodic rock. The key elements have been in place since their self-titled 1977 debut: Robin Zander‘s powerful lead vocals, often doubled (an octave higher) by guitarist Rick Nielsen; Nielsen’s mock-heroic (yet underrated) guitar abilities; Tom Petersson‘s thunderous, eight-string bass and Bun E. Carlos‘ solid-as-rock drumming. But — 2016 Rock and Roll Hall of Fame induction notwithstanding — Bun’s gone, replaced by Nielsen’s son Daxx. The difference is subtle but real, and something important has been lost. Some songs sound like rewrites: The intro to “When I Wake Up Tomorrow” echoes “Tonight It’s You.” The album offers nothing as immortal as anything they did in their early days (though “No Direction Home” comes close), but Bang, Zoom, Crazy… Hello is still a solid if unspectacular addition to the group’s catalog.