The group, founded in 1999 in Leeds, England, has been doing an extended series of shows in Brooklyn annually for awhile now, says guitarist Eddie Roberts. “We’ve been playing at the Brooklyn Bowl for years. We started out doing one night, expanded it to two nights, then to three nights, and then we threw in the kids’ show.” 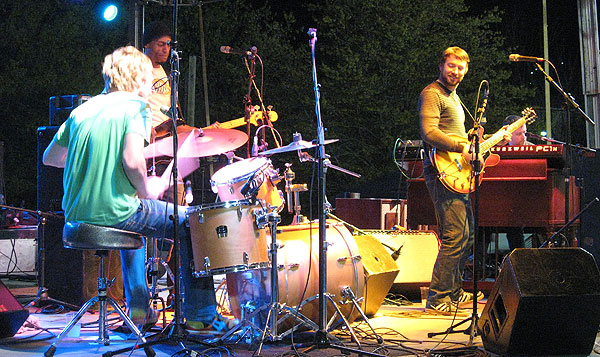 While the band is known for its marathon late-night sets, the matinee performance (Saturday, April 16) gives a chance for a whole new audience to experience the band live. The daytime show is especially popular with “a lot of our older fans who now have kids,” says Roberts. “It’s kinda cool; a lot of people come for all four shows.”

The New Mastersounds generally find a packed room when they take the stage. But not always, laughs Roberts. “We had a problem one time. We played a Thursday, and it was Hannukah. There were about twenty people there.”

Over the years and across more than a dozen albums, the group has expanded, contracted to its core quartet, and featured many guest artists. “Our second album [2003’s Be Yourself] was a four-piece, with one guest singer: Corinne Bailey Rae, before she was famous.” The group’s latest release, Made for Pleasure, features guest vocalist Charly Lowry. “I met her through Everyone Orchestra on a run down in the Carolinas,” says Roberts. “These things are pretty organic, [involving] people you meet on the road, and people you just want to work with.”

Though the quartet’s sound is rooted in jazz, soul and funk, they’re popular on the jam-band circuit. “Especially for me, as I’m from a jazz background, the improvisational side of things is there in our music,” Roberts says. “Combine that with funky grooves that people like dancing to; I think that’s why they like it.”

An edited version of this feature appeared in Brooklyn Paper. Check back soon for a review of their latest, the vinyl-only release, The Nashville Session — bk