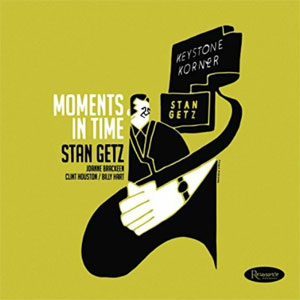 Stan Getz Quartet – Moments in Time
The first of two releases chronicling tenor saxophonist Stan Getz’s May 1976 residency at San Francisco’s Keystone Korner, this is a thrilling single-disc collection of live music by Getz and his three sidepeople (Joanne Brackeen, piano; Clint Houston, bass; Billy Hart, drums). Superb song selection and even better musicianship are the dual highlights of this timeless set, which sounds (stylewise) as if it could have been recorded any time between the late 1950s and the following three decades. Again, our intrepid jazz archivist Zev Feldman tells the story of how he found these tapes and brought them to current-day listeners. His Q&A with drummer Billy Hart – and a short note from Getz’s son Steve – round out a nice booklet that also contains some good live performance photos. Apparently some “sound restoration” took place on these tapes, but by the sound of them, you’d never know the CDs weren’t sourced from pristine pro tapes stored in some climate-controlled vault for forty-plus years. 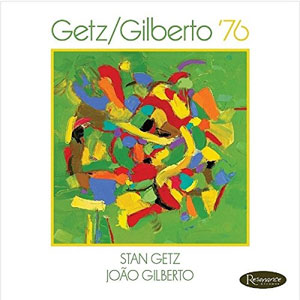 João Gilberto & Stan Getz – Getz/Gilberto ’76
The provenance of these recordings is the same as the above title, and the lineup is the same, with the addition of Brazilian vocalist and guitar sensation João Gilberto, he of “Girl From Ipanema” fame and so much more. The program here is give over almost wholly to Gilberto’s original material (no “Ipanema”) and similar material. By its very nature, this material is far more subdued than the Monents in Time set, and – other than some nice sax solos – Getz’s band rarely takes the spotlight. Feldman includes another whole interview’s worth of conversation with drummer Hart for this set. 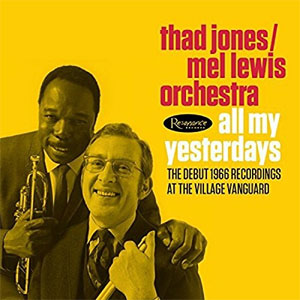 Thad Jones/Mel Lewis Orchestra – All My Yesterdays: The Debut 1966 Recordings at The Village Vanguard
Few would make the case that big band jazz was anywhere near its peak in the mid 1960s. But likely you couldn’t tell that to bandleader Jones and drummer Lewis; this set finds the big band playing like their lives depended on it. There’s a swinging vibe that – while not exactly loose – feels miles away from the stiff arrangements and readings sometimes associated with large jazz orchestras. The material is built upon a repertoire of standards, yet has the energetic vibe of Buddy Rich‘s pop-leaning shows of the same era. For this set, Feldman made the unusual decision to package the CDs and book in a larger-than-standard case; apparently this engendered complaints and backlash from OCD-leaning consumers who need their CD sets to be either standard size or a box set (a point of view I appreciate), so he’s vowed not to do it again. That issue aside, this is a wonderful set of music in a lovely package. 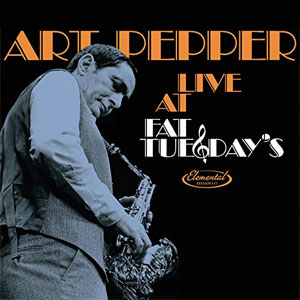 Art Pepper – Live at Fat Tuesday’s
Heading in more dissonant and wild direction than most of the other titles discussed here, this live recording of a 1981 concert in New Your City focuses on material that lends itself to ambitious interpretations: Monk’s “Rhythm-a-ning” is the best example. And when they slow it down, as on Gordon Jenkins‘ “Goodbye,” thee band shows off their skills in a different manner. Zev Feldman’s in-depth interview with the saxophonist’s widow Laurie Pepper forms the backbone of a characteristically excellent liner note booklet. This is little more than conjecture on my part, but perhaps the reason this title is released on Elemental (as opposed to Resonance, under the umbrella of the not-for-profit organization Rising Jazz Stars) may have to do with Pepper’s estate owning the material. Omnivore Recordings has also released several Pepper titles over the last year or so.

Note that another title, jazz organist Larry Young‘s In Paris: The ORTF Recordings has also been released recently by Resonance; a review copy was not available at the time of this writing.

The release schedule for Feldman’s labels would be impressive by the standards of a mid-sized record label; that these releases come from a tiny label specializing in jazz — and a nonprofit 501(c)(3) organization at that – is truly remarkable. Tantalizingly, and judging by Feldman’s regular Facebook dispatches from locations across the globe, there’s every reason to suspect more jazz treasures will be revealed in the near future.