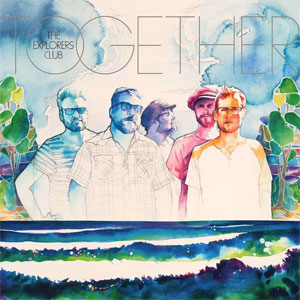 This is the second of my two recent features on Explorers Club. Hey kids: collect ’em all! — bk

Jason Brewer, leader and songwriter of Explorers Club, explains the challenges of making music by way of a musical reference: “Have you heard that old soul song ‘Love is Like a Baseball Game’ by the Intruders?” he asks. “Being in a band is like a baseball game. It’s all strategy.”

Strategic thinking is precisely what led Brewer to move his band from Charleston, South Carolina, to Nashville. The group, whose sound bears the unmistakable influence of the Beach Boys, might not otherwise have remained together to make its third album, pointedly titled Together, out June 24 on Goldstar Records.

“Growing up in a tourist town was always fun,” Brewer says.

But he grew frustrated with the band’s lack of progress in the seaside city. “At one point I considered not doing the band anymore,” he says. “I was at a standstill.”

So Brewer moved his family 550 miles inland to Music City. “The thing about Nashville is, you can focus a little more here,” Brewer says. “There are a lot of studios, a lot of people doing music, that’s what you do here. I have a lot of friends in Nashville who motivated me and got me going on this album.”

From the beginning, Explorers Club has sought to take qualities of earlier pop music forms and update them for 21st century listeners. Blissfully free of modern rock angst, Together is a return to the sound of Explorers Club’s first full-length, 2008’s Freedom Wind (Dead Oceans). The album’s pastiche of mid- to late-1960s (and beyond) Beach Boys vocal harmonies and production scored well among critics, but sold modestly.

For the group’s second disc, 2012’s Grand Hotel (Rock Ridge Music), Brewer changed direction. The songs and arrangements add a strong influence of early ’70s AM radio pop, with an emphasis on succinct melodies, up-tempo horns, and avoiding the “heaviness” that pervaded late ’60s pop. Brewer recalls thinking, “I still want all these cool harmonies, but let’s try to add these other flavors of other things that really strike my ears and influence me,” he says. “Maybe people will pick up on it.”

They did, but audience reception was sharply divided. The band split, too. Half the group left during sessions for Grand Hotel, and the album was completed with help from friends and session players. Brewer decamped for Nashville not long after.

For Together, Brewer assembled a smaller incarnation of Explorers Club. Working on the album as a group rather than compiling a record from various sessions and players gives Together cohesiveness. The sun-kissed melodies of “Be Around” and Together‘s first 7-inch, “California’s Callin’ Ya,” balance melancholy with charming optimism. “Perfect Day” lets the vocal harmonies shine, adorned by nothing more than Spanish guitar and a splash of reverbed electric guitar.

“We learned the songs together, rehearsed together, recorded it to tape together, and put vocals on together using two or three mics,” Brewer says. “That was something that didn’t happen on the other albums, they were made piece by piece.”

With Together, the Explorers Club incorporates the lush and ever-present Brian Wilson influence, but brings in a new and often times strange sound to the mix.

One of the album’s highlights is a re-recorded version of “Don’t Waste Her Time,” a tune that Brewer co-wrote with Wilson collaborator Andy Paley. The song was originally released as a 2013 single produced by Mitch Easter, done in a Phil Spector style, with a mini-orchestra. Each sound bled together, over layers of a not-quite-perfect vocal delivery. “As raw as it gets,” Brewer says.

The new recording is tighter and features synthesizer work from Darian Sahanaja, keyboardist and musical director for Wilson’s touring band.

Still, as a pop group, the Explorers Club knows where the primary musical emphasis should be strategically placed. “On Together, the vocals take their center place,” Brewer says.

While giving credit to the musicianship the album displays, he adds, “It’s all about the singing.” And the strategy is paying off. After loading up the bases with  Explorers Club’s previous albums, Brewer knocks one out of the park with Together.

An edited version of this feature was published in Creative Loafing.