On Third Album, Explorers Club Gets it ‘Together’

Recently I interviewed Explorers Club’s Jason Brewer for a pair of features, one in Atlanta’s Creatve Loafing and the other in Athens GA’s Flagpole. While both interviews focused on the group’s new album Together, I covered it from different angles in each feature. Here’s the first of the two interview features. — bk

When Explorers Club released their debut album (2008’s Freedom Wind), critics raved, but some also wondered aloud if the group didn’t sound a bit too much like the Beach Boys. Leader and songwriter Jason Brewer admits as much: “It was the first time I had made a real album,” he says. “I approached it as, ‘What can we do, but still stay inside the confines of what the record company that signed us is looking for?’ So we stuck with the Brian Wilson thing.”

The group – at that point, Brewer in the studio plus friends assembled for the occasional live date – ended their association with the label Dead Oceans, and began work on its followup, Grand Hotel, released in 2012 on Rock Ridge Music. “With the second album, maybe I was being immature about it,” Brewer says. He took the band in a different, commercially riskier and altogether more ambitious direction, creating songs and arrangements that evoked the sounds of AM radio pop of the early 1970s. 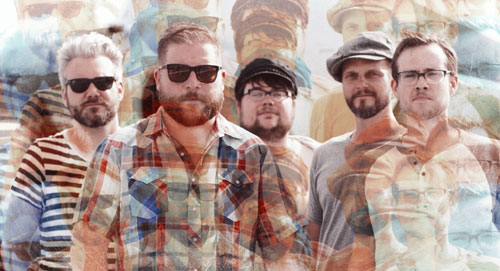 Grand Hotel often recalls groups like The Association and The 5th Dimension; one song sounds like it’s lifted right off of Herb Alpert and the Tijuana Brass‘ Whipped Cream & Other Delights, the smash pop album from 1965. Brewer allows that “Grand Hotel certainly combined other elements. There was maybe too much of a conscious attempt to get away from the sound of the first album, though it still showcased the vocal harmonies and the old-school feel.” Brewer says that the album “was hard to make; half the band quit in the middle of making it; I don’t think they were into it.” Explorers Club very nearly folded at that point.

But rather than give up – Brewer in fact experienced something of a crisis of confidence at that point – the songwriter relocated from Charleston, South Carolina to Nashville, a place he found more conducive to focusing on his music. Brewer recalls that his friend (and Superdrag founder) John Davis “said to me, ‘I really hope that Grand Hotel is not the last thing you do. Because you could make another really great record.’ He gave me a real kick in the butt.” Brewer says that BMI’s Brad Wilson “sat me down and gave me a pep talk, a motivational speech. They both stayed on me for a couple of months. And I really started getting my writing groove back.”

Soon thereafter, Brewer put together a new, smaller version of Explorers Club. Returning are Brewer plus drummer Kyle Polk and keyboard player Paul Runyon; new to the group are bassist Wyatt Funderburk (“a fellow musician who’s been a friend of the band for a long time,” says Brewer) and guitarist Mike Williamson. “Mike played guitar and bass on both previous albums; he sang on everything we’ve ever done, and even toured with the band for awhile on our first album tour,” Brewer says. “The other versions of the band were fun, and they were all talented people. But until now, it just didn’t come together in a way that it should have.”

Brewer believes that Together, scheduled for release June 24 on the group’s own label, “is the first one that we’ve done that was really born out of a personal feeling. The lyrics are way stronger than on the other two; all the lyrics on all the songs have a little more meaning to me.” And rather than cede control and responsibility for extramusical matters to a label or management, these days Explorers Club keeps it all in house. “I talked to a bunch of different labels,” says Brewer. Several liked the band’s music but “nobody knew what to do with it. And I just got tired of bad offers. So I started a label.”

As a result, a conversation with Jason Brewer often finds him using phrases like “distribution channels” and “licensing” and “social media advertising budget.” But for Brewer, the bottom line in all the business dealings is the freedom to make music the way he wants to. “I got what I wanted, and I got the control,” he says. “You can’t complain about that.”

An edited version of this feature was published in Flagpole.