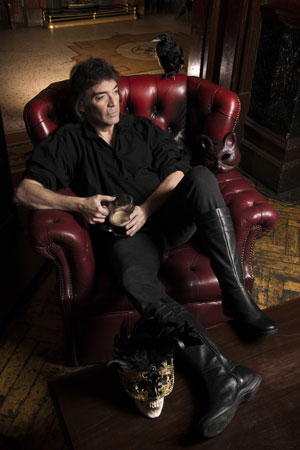 Bill Kopp: You’ve acknowledged that the early 1970s Genesis catalog was not very commercially successful in its day. But it’s so highly regarded now. Why do you think that is the case? What do you think is the source of the enduring appeal of that Genesis music?

Steve Hackett: The albums that didn’t necessarily sell that well in their day subsequently sold huge amounts; Genesis was a very slow burn. By the time we were doing a guest spot on the Mike Douglas Show, the band had been playing together for a long time. And I’d been with them about six years. Suddenly, when you get that level of national exposure – for any act who’d got to play on Johnny Carson‘s Tonight Show, or David Letterman, or whomever – you’ve got that coast-to-coast coverage. And that makes a huge difference. You’re not playing to clubs and colleges; you’re playing to stadiums and arenas. So that’s hugely beneficial. And it helps if a band’s got a decent catalog for people to discover.

The band had a long time to form its ideas. And luckily in 1973, John Lennon said that we were one of the bands he was listening to. Now these days, of course, if he had given that in an interview to WNEW in New York, that would have been instantly tweeted and the social networks would have had it. And maybe the rise to fame of Genesis would have been years quicker. But in the day, it hardly got a mention. We couldn’t get a gig in the States at the time! You couldn’t validate that back in the day. Now, of course, I take that as a huge compliment. I know that I’m profoundly affected by that. It’s something that was huge encouragement for us guys who were sitting round listening to Lennon, who was ten years older than us. Praise doesn’t come higher, really.

BK: This weekend [March 2016] you have an appearance that’s billed as “In Conversation.” Tell me about that.

SH: That’s in Leicester. Paul Gosling, a friend of mine who happens to be a professor and filmmaker, and who’s been working on some videos with me in recent times is an extremely accomplished, gregarious and intelligent guy. Through him, some dances worked up some stuff that was based on one of the tracks on Wolflight, the latest album. The track is “Corycian Fire,” based on the idea of Greek history before Delphi was up and running, and before it was sacked by the early Christians. There was a place called the Corycian Cave. It’s hidden away beneath Mount Parnassus. My wife and I did this trek, uphill, for an hour and a half to find this place. And we were completely exhausted by the time we got to the top. It’s a hugely impressive, spooky, magical place. It’s where divination first took place. We shot a video there with Paul, and it’s one of the things that’s upcoming.

So one of the things we’ll be talking about is that. It’s basically a Q&A. He’ll ask me questions, and then he’ll throw it open to the audience. So it’s for anyone who wants to know anything about anything from Genesis to fuzz boxes to Yehudi Menuhin. I guess I’ll talk about everything openly.

BK: The web site teases that the tour will include material from your solo work and Genesis, plus a few surprises. Can you give any hints as to the nature of those surprises?

In recent times, I have a band that includes Roine Stolt [Flower Kings, Transatlantic], someone who’s a brilliant guitarist in his own right. He plays bass with us, and a bit of guitar; we swap some lead things. We do two sets; we’re like two bands in one. First it’s the solo stuff, then we have an intermission. Then we come back with the Genesis stuff; we become the Genesis of a certain era: before the video era, and when the music was more experimental. It’s the period 1971-77, and most of the time we’re highlighting the Peter Gabriel years.

And last year was the 40th anniversary of my first solo outing, Voyage of the Acolyte, so we’re doing quite a few things from that album. We do a bunch of things from Spectral Mornings, a bunch of things from Wolflight. It’s an attempt to throw light – if I can use that word – on the total experience: those who’ve got on board with my solo stuff, and those who’ve got on board with Genesis. Rather than exclusively doing Genesis all night, I’m stressing both ends of the spectrum of my career.

By the time you’re finished, you don’t get a lot of short change out of about three hours.

SH: Hmm…I’ll have to check in with the band, and see if they’re able to do it from the drop of a hat.

BK: Near the end of The Man, The Music, you talk about you and your wife Jo moving into a new house last year, and your hope to build a studio in the garden. Have you started that project yet?

SH: I haven’t waited until we got the OK from the local council; what I’ve done is, I’m recording in the living room at the moment. It’s not the first or last time that I’ve done that. I’ve had studios in the past; the last one I sold in order to move into the new house. So meanwhile, half the living room is turned into a studio. It’s annoying in one way but wonderful in another; I can fall out of bed straight into the studio.

Steve Hackett’s Genesis Revisited tours the USA through April, then it’s on to Japan, the UK and Italy.

An edited version of this interview appeared previously in BLURT. — bk