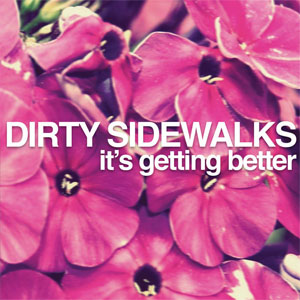 The a-side, “It’s Getting Better,” has already gotten some commercial traction in one of the few forms that actually generates income for the artist: TV and/or film placement. Twenty-odd seconds of “Getting Better” played during Episode 11 of Season 6 on Showtime’s Shameless. I won’t be the first or last to point out the song’s passing similarity to Modern English‘s 1980s smash “I Melt With You.” Regardless, it’s a catchy song that displays the group’s skill at writing and playing memorable tunes with a hook.

The flip track is “Hey Girl (I Wanna Be Your Man),” listed on the sleeve simply as “Hey Girl.” A video for the track recently premiered on Popshifter. Like the a-side, it showcases the band’s signature style, a chiming, stomping vibe characterized by fuzzy guitars, an insistent but not overwhelming beat, and understated, near-whispered vocals. There’s a solid pop undercurrent to Dirty Sidewalks’ music; it’s a successful melding of a grunge/shoegaze aesthetic with a catchy pop foundation and good old-fashioned guitar solo.

Apparently the single is available on either white or black vinyl. Mine’s black. More info on the band is at their Bandcamp page.