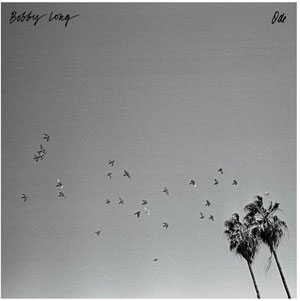 At only 30, Bobby Long has a deep catalog of work. After three self-released albums beginning with 2009’s Dirty Pond Songs, he signed with ATO Records and began a string of releases for that label: two EPs to date, and two full-lengths. The latest of his albums is Ode to Thinking, released in 2015 on Compass Records. Now comes a vinyl version of that set, with the shortened title Ode.

Nominally a folk-based singer/songwriter, Long has a good ear for melodies, and he moves beyond the voice-and-guitar simplicity of folk, overdubbing his vocal harmonies and adding subtle touches of other instrumentation. He applies his hoary, gruff vocals to melodic songs, and the result is shot through with a yearning sincerity. Long is British (born in Wigan, near Manchester in northern England) but little in his vocal delivery, writing style or arrangement sensibility suggests he’s anything other than an American singer/songwriter. (These days he lives in New York City.)

On the more rock-leaning tunes, keen listeners may Karl Wallinger‘s World Party, or Neil Finn‘s Crowded House; “I’m Not Going Out Tonight” has a feel halfway between those top-notch writers and a heartland Americana-flavored rock of Tom Petty or prime era John Mellencamp. Elsewhere – and mostly – he hews closer to a straighter Americana vibe, as on the sentimental “Something Blue, Something Borrowed.” The arrangement on “Th Dark Won’t Get Darker” is the sonic equivalent of the cinematic technique of backing slowly away from the camera’s subject, revealing more eith each passing frame.

The vinyl Ode is substantially different than its similarly-named CD counterpart. Ode trims five songs off of the CD version (“Cold Hearted Lover of Mine,” “Kill Someone” and “Hideaway,” “The Songs the Kids Sing” and “That Little Place”) and adds three new songs (“Pretty Little Pennies,” “If You Don’t Want to Be with Me” and “From Me”).

It would be oversimplifying to suggest that Long cut songs in a particular style to give the vinyl album a different flavor; instead he succeeded at cutting across the board. But the songs he’s added do subtle shade one’s impression of him; “Pretty Little Pennies” has a bit – but just a bit – of 60s electric guitar jangle and some female backing vocals that add a nicely rounded out feel to the track.

“If You Don’t Want to Be with Me” has some southern soul (Stax/Muscle Shoals) characteristics; the Hammond B3 only reinforces that feeling. (The vinyl record doesn’t provide musician credits.) Outside of the single “I’m Not Going Out Tonight,” “From Me” is the closest that Long gets to rocking out on Ode. He does so convincingly – apparently he paid dues in a gunge band some years ago – but the rocking isn’t his preferred mode of song delivery.

And that’s fine: as Ode amply demonstrates, Bobby Long does what he does quite well.