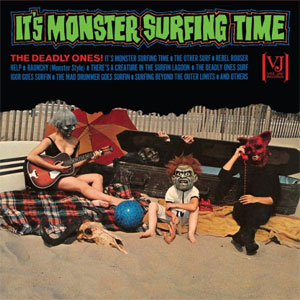 Two of pop culture’s kitschiest phenomenons collide on this new reissue of an ultra-rare LP from 1964.

Not counting revivals and renewed interest, surf rock was popular from about 1962 to ’64 (a year that – not at all coincidentally – The Beatles took off in America). Originally centered around southern California, the style quickly became popular nationwide, even in places hundreds of miles form the ocean, towns that had never seen an actual surfboard.

The style was characterized by twangy electric guitars and resonant, often single-note-at-a-time guitar lines. Fender guitars and amps were the coin of that realm, and guitarists like Dick Dale were its royalty.

Monsters had long been popular in American culture, from before the earliest days of the motion picture. The 1950s saw a resurgence of interest in monster themes, and B-movies added aliens into the mix for good measure.

Musically, Zacherle (“the cool ghoul”) delivered his shtick on records, and of course Bobby “Boris” Pickett scored a massive hit with “Monster Mash.” That tune hit the charts in ’62. So by 1964, combining the two might have seemed something of a last gasp, one more cash-in before the metaphorical tide rolled out. But It’s Monster Surfing Time is more interesting than the circumstances surrounding its release might suggest. The tunes are fun and catchy, and the haunted house sound effects appended to most of the tracks aren’t overly obtrusive.

Sometimes it works better than others. With its simplistic and prominent horn charts, the midsection of “The Mad Drummer, Pt.1” sounds for all the world like a lazy rewrite of the “Batman Theme.” But “There’s a Creature in the Surfer’s Lagoon” features some delightfully rubberband-y guitar lines and ginchy combo organ, with nutty vocalizations throughout. It’s easy to imagine teens doing the frug or whatever to this one. And while “The Mad Drummer, Pt. 2” features more of those Batman horns, the organ part is brought forward in the mix where it belongs.

Round about Side Two, the guys who wrote these songs (the label expends no effort in revealing who The Deadly Ones truly are) run out of songwriting steam. The result is a second side in which cover versions predominate. Bill Justis‘ instrumental chestnut “Raunchy” gets the Deadly Ones treatment, and other than some ghoulish yells (maybe but probably not a Theremin), it’s a straight reading of the tune, with more of the requisite yakety sax.

Duane Eddy and Lee Hazlewood‘s “Rebel Rouser” isn’t especially monster-iffic, but The Deadly Ones add carnivalesque screams, maniacal laughter, and a rebellious “yahoo!” And apparently there were a few minutes left on the sax player’s time card, so he joins in on the fun. “Igor Goes Surfing” features more vocals (of the heavily-reverbed spoken variety) than anywhere else on the disc. The album overall has a tinny, Joe Meek vibe about it, which is exactly what the music calls for. In fact, if I learned that Meek had indeed produced this LP – he almost certainly did not – I wouldn’t be the least bit surprised.

With the sole exception of “The Mad Drummer, Pt. 2,” all twelve songs clock in safely under the two-and-a-half minute mark; two squeak in at around 1:40 each. Which is to say that It’s Monster Surfing Time is a brief as it is ephemeral. But quality wins over quantity every time, and this is a fun album start to finish.

There’s little about the album as a whole that isn’t wholly derivative and fairly faceless. But none of that keeps it from being good, clean fun. Originally released on Vee-Jay Records (yep, the label that released Beatles records stateside before Capitol wised up), the record quickly became quite valuable. Most copies you’ll find are white label promos, and change hands for big coin, if you can even locate one. Collectables reissued the album on CD back in 2001, but a 2016 reissue from Concord (the parent company and owner of the Vee-Jay catalog) is on good old fashioned vinyl. And not plain old black vinyl, no no no. The 2016 reissue is on “slime green translucent” vinyl. It’s the one to have: the cover art is trashy, low-budget and exquisitely appropriate for the music within.