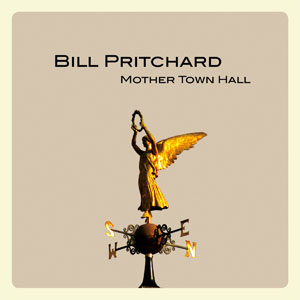 Despite having released nine albums since 1987, England-based Bill Pritchard isn’t well-known at home , much less here in the USA: he’s developed a sizable following in France, of all places. His music has the wry storytelling vibe of Nick Lowe, and his expressive baritone has been described as midway between Squeeze’s Chris Difford and Robyn Hitchcock. His songwriting is sharp and focused. Songs like Mother Town Hall‘s opening track “Saturn and Co.” – slyly referencing his late 80s minor hit “Tommy & Co.” – have deeply memorable hooks, often helped along by some lovely vocal la-la-las. Though his jangling style has roots in the 80s alternative pop world, there’s a timeless feel to his songs that elevates them far beyond genre. The left-handed guitarist makes superb use of subtle textures – tinkling electric pianos, brushed drums – to deliver his winning melodies.