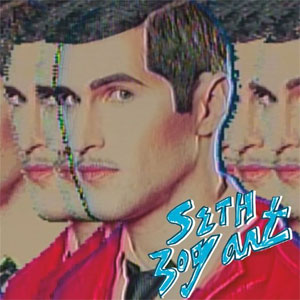 File next to: The B-52s, Apples in Stereo, The Television Personalities

There’s always a place for some quality trash culture dance pop. Bogart got his start under the Hunx and His Punx moniker, crafting a clever amalgam of bubblegum and punk that was somehow both more innocent and naughtier than The Ramones. With his first release under his own name, Bogart puts together synthy dancefloor classics full of silly ideas (“Eating Makeup”), witty social commentary (“Hollywood Squares”), and inspired wordplay (“Nina Hagen-Daaz,” “Supermarket Supermodel”). Bogart’s gay-themed subject matter is never far from the surface, and it’s delivered in a joyous, devil-may-care manner, full of twinky Casio synths and drum machines. Even when he goes melancholy (“Forgotten Fantazy”), Bogart manages to make moroseness sound like a heckuva lot of fun. The twelve tunes on Seth Bogart are truly in a (human) league of their own.

Tags:hunx and his punx, seth bogart