DVD Review: Frank Zappa and the Mothers — The Lost Broadcast 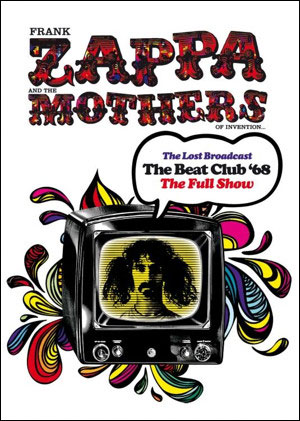 For an artist who seemingly documented nearly every moment of his live and studio performance – and, not unlike John Lennon and Yoko Ono, considered the entirety of it as a single body of work – the early work of Frank Zappa‘s Mothers (of Invention) was, surprisingly, not as extensively captured and saved as one might hope. So the official release of a nearly eighty-minute black-and-white film of The Mothers’ rehearsal prior to their 1968 television performance on Bremen, Germany’s Beat Club is welcome.

It’s a good ten-plus minutes into the film before anything approximating a band playing music takes place. The music here roughly dates from the Uncle Meat period, so viewers are treated to readings of “King Kong,” “A Pound for a Brown on the Bus,” “Sleeping in a Jar” and the title track from Uncle Meat. And as always with most every lineup of The Mothers or Zappa’s later band, these readings differ from the officially release versions.

The quick-cut editing of the Beat Club film (or video) editors is dizzying, and bears greater resemblance to the ADD-addled manner in which 21st music video editors work, but in the context of the Mothers’ music, it all makes a kind of sense: the music is disorienting, so why shouldn’t the visuals reflect that?

Twenty or so minutes in, the band engage in a I-IV-V rock’n’roll jam that could be “Rock Around the Clock” or any of a thousand other early rock jams. Various band members and young ladies engage in some dancing, and everybody seems to be having a hell of a lot of fun. The sax work is particularly tasty, as the saxophone on Zappa’s albums rarely got this, er, conventional.

The audio does drop in and out here and there (a notice warning of this is placed at the film’s start) but it’s not distracting enough to deter those inclined toward an hour-plus of The Mothers in rehearsal. Engineers are clearly testing and setting levels, and fiddling with the posterization and green-screen effect that were a trademark of Beat Club. The closer it gets to the end, the better the audio quality gets.

Speaking of trademark characteristics, Zappa’s patented hand signals to his players are in prominent use here, and it’s possible to get an idea of just how effective they were in guiding the seemingly free-form music into shape.

Some abstract dialogue between Zappa, Motorhead, and Don Preston is reminiscent of the weird spoken moments on Lumpy Gravy and the booger-themed ruminations on The Lost Episodes. Near the end of the rehearsal, The Mothers turn in a surprisingly straight instrumental reading of “Let’s Make the Water Turn Black” from We’re Only in it for the Money. For those who appreciate the more outré end of Zappa’s work, there’s a rare and spirited run-through of “Prelude to the Afternoon of a Sexually Aroused Gas Mask,” complete with actual gas mask. The assembled crew and technicians are heard off-camera applauding. At the time, it’s likely that no one had any idea of the historic nature of what they were witnessing.

Somewhat unexpectedly, if one selects the original broadcast from the DVD menu, what appears is the film you’ve already viewed, picked up forty-odd minutes after its start; in retrospect it’s clear the approach the German TV crew took to documenting the performance: roll cameras, move around to get good and dynamic angles on everything, and then splice off the beginning and ending to create a finished product. In the end, the spontaneity and do-it-and-on-to-the-next-project aesthetic of that approach fits the music perfectly.