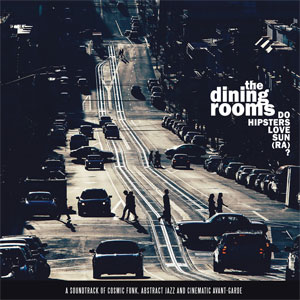 More even than the album title, the title of the tenth track on Do Hipsters Love Sun (Ra)? sums up the musical approach of The Dining Rooms on their twenfth full-length album. “Instrumental Hip Hop Is Back” delivers on its titular promise. The Milan, Italian group is essentially a duo – multi-instrumentalists and co-producers Stefano Ghittoni and Cesare Malfatti – plus selected guests on various tracks; that configuration gives them an aesthetic that’s slightly reminiscent of another genre-smashing act, Steely Dan. But while Donald Fagen and Walter Becker sought (among other goals) to incorporate jazz into rock, The Dining Rooms skillfully combine disparate sonic elements into a jazz foundation. The result neither sounds nor feels like most people’s idea of jazz.

And that’s all to the good. Self-describing the music on Do Hipsters Love Sun (Ra)? on its cover as “a soundtrack of cosmic funk, abstract jazz and cinematic avant-garde, The Dining Rooms create music that might remind some listeners of the aforementioned Sun Ra. But perhaps even more evident are the sonic connections between this music and that of trip-hop heroes Zero 7 (another duo who strategically augment themselves with other players and vocalists), and the flown-in, found-sound aural collage of Voyage 34, an early album from the days when Porcupine Tree was just Steven Wilson at home in his studio.

Do Hipsters Love Sun (Ra)? is a wholly successful combination of electronica (dig the analog bass bombs on “Appuntamento su Marte” (“Appointment on Mars”), drum and bass (experience the trippy drums on “Interstellar”), and wonderfully cinematic textures. The only vocals per se on the disc are sampled from kitschy old records. Antoinio Grantieri‘s sonorous and heavily reverbed electric guitar calls to mind that (in this context) most obvious of references, Ennio Morricone. But while spaghetti western texture would be right at home on Do Hipsters Love Sun (Ra)?, The Dining Rooms head elsewhere. Bruno Dorella‘s distorted yet simple guitar lines on “Devil’s Moon” will appeal to fans of Television as much as they might to those with a more jazz-centric musical perspective.

Acoustic instruments figure into The Dining Rooms’ musical mix every bit as well as do modern electric/electronic ones: “Saturno” features upright bass and baritone sax right alongside a Farfisa Synthorchestra (a mid 1970s keyboard favored by prog outfits of the day like Ash Ra Tempel) and Ghittoni’s beats.

The most rock-leaning tune (“Sergio Leone Asteroid”) comes late in the program: after an extended clip of a man speaking Italian, Malfatti (or perhaps Geppi Cuscito) lays down a hypnotically repeating electric guitar figure. Ghittoni provides an alluring foundation of beats and samples. Luciano Cantone‘s buttery vibraphone is the icing on the cake. In fact, those who are intrigued by this review — but wary of venturing into jazz — are advised to begin with this track; its charms will likely win you over and prepare you for the musical world of The Dining Rooms. The next track – the aforementioned “Instrumental Hip Hop is Back” will seal the deal. 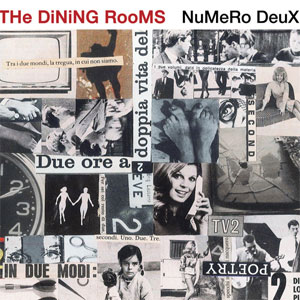 And once you’ve immersed yourself into Do Hipsters Love Sun (Ra)?, there’s more where that came from. Newly reissued (and thus easier to find than the other entries in The Dining Rooms’ deep catalog), Ghittoni and Malfatti’s second album, 2001’s Numero Deux shows that they’ve been successfully working outside the margins of genre confines for many years. It’s a worthy excursion back in time; meanwhile, Do Hipsters Love Sun (Ra)? is hereby shortlisted for inclusion on my best of 2016 list some nine-plus months from now.