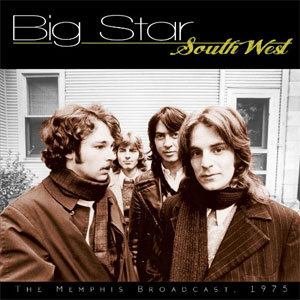 Though they were resolutely ignored during their time together in the 1970s, Memphis-based Big Star eventually got both their critical due and some exceedingly belated recognition and commercial success. The reunion shows and tours featured original members Alex Chilton and Jody Stephens plus – from The Posies – Jon Auer and Ken Stringfellow (a full-concert version of their live Columbia album is due out soon). The Keep Your Eye on the Sky box set and the No One Can Hurt Me documentary both helped elevate Big Star into the popular consciousness.

One byproduct of all of this 21st century Big Star-related activity is that lesser-known artifacts related to the band now have some measure of commercial value. And that eventuality will (in a moment) bring us to a new grey-market CD release called South West.

Those who know of the career arc of Big Star and the mercurial Alex Chilton are aware that with the release of the brilliant Third/Sister Lovers album, things went off the rails. Third is brilliant but dissolute, messy. Yet it scarcely prepared Chilton’s followers for what was to come. His solo album Bach’s Bottom is yet another glorious mess. There are deeply wonderful gems scattered among the tracks from that punningly-titled album, but much of it is slipshod.

Not long thereafter, Chilton released Like Flies on Sherbert, a record that is, if anything, even more of a mess, more dashed-off feeling than its predecessor. Chilton’s other activities – including a stint with Tav Falco’s Panther Burns – followed very much in this whacked-out, devil-may-care ethos.

Where South West fits into this story is a bit fuzzy, but here goes: around the time of the Third sessions, the group formerly known as Big Star was down to Chilton and Stephens plus pretty much whomever happened by. The pair — at least we think Stephens is present – appeared in January 1975 for a live broadcast on a Memphis college radio station, WLYX. They ran through eight songs. Bootleg tapes of that broadcast have circulated for decades under such titles as Beale Street Breakdown.

Now in the 21st century, the tapes have gotten a kind of official (though, one suspects, not officially-sanctioned) release as South West (the title refers – albeit clumsily – to the origin of the broadcast, Southwestern University).

Those who have heard Beale Street Breakdown won’t find anything new here. The source tape for this release sounds in all likelihood to have been sourced from a collector, which is to say it’s of unknown generations from the original, and that the sound is dodgy. And the performance … well, the performance is just what one might have feared (or looked forward to, as the case may be).

Chilton is in his dependably prickly and mischievous mood as he tears through an eight-song set that includes three tunes from Third (The Velvet Underground‘s “Femme Fatale,” “Oh Dana,” “Kizza Me,”), two songs from the Bach’s Bottom cache (“Take Me Home and Make Me Like It,” “Jesus Christ,”), The Boxtops‘ “The Letter,” and two reliably off-the-wall covers. Those two are The Bonzo Dog Doo-Dah Band‘s “Death Cab for Cutie,” a song that originally appeared in The Beatles‘ Magical Mystery Tour film, a project that fits in nicely with Chilton’s bent aesthetic (and yes, it inspired a latter-day group to name themselves after it). The other track is a cover of Dolly Parton‘s “I Will Always Love You,” later covered to wholly unsubtle, non-nuanced effect by one Whitney Houston.

And slipshod doesn’t even begin to describe Chilton’s approach to the tunes. “Take Me Home and Make Me Like It,” in particular, features the song’s familiar lyrics, but a, er, melody that’s from somewhere else. Chilton serves up all-around irreverence as he demolishes both his songs and the works of others. Is he having a good time while doing so? That question is left to the listener to determine for oneself.

More importantly, will that listener derive enjoyment from these recordings? The answer is both simple and conditional. If you can find the genius and/or creativity in Bach’s Bottom and Like Flies on Sherbert – if you can appreciate all (and not just some) of the music on those two albums – then you’re almost assured to enjoy South West. I recommend it to you in the strongest terms: You simply need to hear and own it. If, however, you found Third tough going and those two Chilton albums unlistenable, my advice is to stay far away from South West.