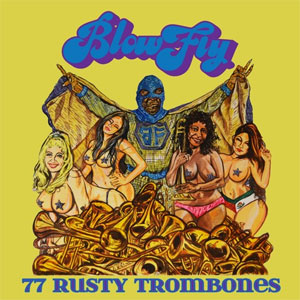 Warning: this review may not be suitable for readers under the age of, I dunno, let’s say…twenty-one. And the subject of the review – Blowfly‘s final album, 77 Rusty Trombones – well, it’s certainly not what one would call family entertainment.

Blowfly was the alter-ego of Clarence Henry Reid, an accomplished singer, songwriter and musician. But Reid’s accomplishments in the 1960s  didn’t translate to much in the way of commercial success, and so by 1971 he set about releasing albums as Blowfly. Those albums – beginning with 1971’s The Weird World of Blowfly – continued a practice in which Reid had been engaging for sometime: making X-rated parodies of popular songs. Before launching his career as Blowfly, Reid made recordings of his comedy pastiches and shared them among friends. But once the albums started coming, he developed the masked- and caped-hero persona to go along with the music. Think of him as a cross between Redd Foxx and “Weird” Al Yankovic (though the latter’s career came some time after Blowfly got started).

The approach rarely differed from album to album, but the quality control (if one can call it that) was pretty high, and as naughty party records go (check out the LAFF Records set or the inimitable Swamp Dogg), Blowfly’s albums have an undeniable appeal. His oeuvre certainly isn’t “good clean fun,” but it’s fun all the same.

Reid passed away in January after a quick and aggressive illness. But he left behind one final, parting shot: 77 Rusty Trombones. Every bit as trashy as his fans have come to expect, it includes well-arranged (albeit quickly-recorded, and it kinda shows) songs like “If You Don’t Blow Me By Now,” a gleeful desecration of the Harold Melvin & the Blue Notes hit. Equally obvious – but no less delightful in a scatological kind of way – are the Queen, er, tribute, “He Will Fuck You” and the Guess Who takeoff, “American Ho Woman.” You get the idea.

Reid/Blowfly alternately sings and raps over a solidly funky band that features some ace horn section work. When he engages in balladry (“I Believe My Dick Can Fly”) you’ll probably groan a bit, hearing this dirty old man outline his illicit designs upon the First Lady. But hey, it’s kinda funny.

The songwriter credits on 77 Rusty Trombones are, shall we say, more than a little dodgy. While the band (led by drummer/producer Tom Bowker) undoubtedly arranged the songs, and Blowfly crafted his own lyrics, there’s no way to escape the fact that the familiar melody of “Blowfly Jeopardy” is the one you know from the TV game show, despite the fact that it’s credited to Bowker. So it goes: the concept of rip-off* even extends to the lettering on the album cover, which bears more than a passing similarity to a certain Curtis Mayfield soundtrack LP.

There’s really no way to capture the insanity of Blowfly on record, and that accounts for his success as a live performer. But with “the original dirty rapper” gone to the great beyond, studio recordings are all we have left. 77 Rusty Trombones is a fitting final word from the man. Enjoy, but please note that you have indeed been warned.

* Postscript: Via Twitter, I received some vigorous pushback from Bowker — who seems to make a habit of confronting people — concerning my use of the word rip-off: “Thanks to [various cited Supreme Court cases], parodies are new compositions, not ‘rip-offs.'” Well alrighty then; I don’t pretend to have a full understanding of copyright law, but I would have thought at least a co-credit of the original composer would have been required. But what do I know?

* Postscript #2: There’s no pleasing some people. Via email, I got even more pushback from Bowker, this time against my stated OPINION characterizing some of the album’s jokes as “dumb” and “puerile.” Newsflash: Blowfly wasn’t exactly Tom Lehrer. Besides, to me Airplane! is dumb and puerile, and it’s also one of the greatest films ever made. Musoscribe is home to my opinions. Though I try, sometimes I get the facts wrong. And like I said, there’s no pleasing some people.