Bill Kopp: At certain points in your career, you’ve made it seem as if writing a hit is the easiest thing in the world for you, but at the same time you’ve made it clear that doing so isn’t something you find very interesting. What part or parts of the creative process do you find most rewarding?

Todd Rundgren: As time has gone on, I most enjoy the process of subconscious expression. In other words, I don’t depend so much on my conscious ‘mentating,’ of trying to come out with a scheme of how a song should evolve, or how a record should sound. I more try to fill my head in general with all of the musical and lyrical fodder that may be germane to the final product. I let it just sit in there and ferment. And then the actual creative part of the process I do in a pretty short amount of time. So I’m depending on my subconscious to do a lot of the work to come up with something that seems coherent.

BK: Something about you that’s often remarked upon is your tendency to be ahead of the curve. Going back to the video production studio, and PatroNet, it sometimes seems as if you put an idea into motion just slightly ahead of the emergence of a market for it. So you end up getting critical acclaim, but you’re left to watch others capitalize on the ideas. Do you think that’s a fair characterization?

TR: It sounds pretty accurate. But the point is, I’m not a capitalist. That’s the problem. I would be much better off if I sat on one of these ideas long enough for it to come to that sort of economic fruition that some of those ideas have come to. But that’s not my purpose. 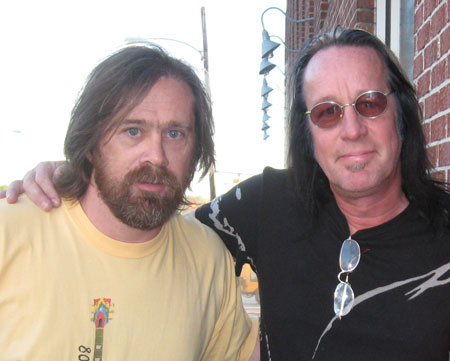 The author with Todd Rundgren in 2008

Second of all, there’s a horrible karma that comes with that. PatroNet, we did in the 90s when there wasn’t any Facebook, Myspace, or anything like that. [I learned about] the evils of social networking! People would just do the most awful things, because they weren’t right there in front of you, [where] you could pop ’em right in the eye. Instead, they use the advantage of distance to vent their most evil thoughts. While that’s not what most people are doing, it turns into a policing job for you, protecting everybody else from these people. That’s all I did. So I eventually shut the whole thing down. I can’t take that responsibility of trying to mediate all this weird karma that people are creating with each other.

BK: You’ve made a career out of confounding and challenging your fans. And speaking for myself at least, that’s appreciated. Last year’s Global and its subsequent tour were certainly a departure, and then the Runddans album was seen by fans of, say, Healing as – if you’ll forgive the term – a “return to form.” When I interviewed you in 2008, you said, “I’m not like Paul McCartney, longing to write my symphony.” I’m sure you’ve already given it some thought: Can you provide any clues about your next project?

TR: I am slated to do another record; it might not be related to any sort of concept I might have had. But what it will be about is still a mystery to me at this point.

I have some very interesting things to get to once this tour is over. In mid-February, I’m going to Holland to do a revival. I had written a musical [Up Against It, adapted from Joe Orton’s original screenplay] for the Public Theater, for the New York Shakespeare Festival, and it was mounted in the late 1980s. And now we have an opportunity to do it with a full orchestra and chorus, in English. And we’ll have an actual [audiovisual] document of it, something that has never existed before.

BK: At one of the earlier shows on this tour, you said something to the audience along the lines of “This is the ‘Coma’ tour, with folks coming out of a 45 year coma to request the songs on this tour’s playlist.” There have been rumors – and I think you’ve said as much sometime over the course of your career – that you don’t especially enjoy playing the hits. But by most reports, you seem to be enjoying yourself on this tour. Can you speak to that?

TR: Well, I’m kind of feeling like I should try and have as much fun as I can at this point, considering that I’m lucky that my body is holding up. My voice is holding up. So every time that I get on a stage and then manage to get off a stage without embarrassing myself, it’s a good day. My expectations aren’t much greater than that; I’m glad to still be able to perform, and still have an audience to perform to.

My commentary was about the fact that some people endure a whole lot of frustration at being a fan of mine, in that I don’t often do exactly what they expect me to do, or what they’ve been longing for me to do. This [tour] is one of those few times that I will factor that in. And I hope that everyone realizes that – unless they want this show so much that they’re willing to pay $250 a ticket for it – I’m eventually going to go off and do something else.

An edited version of this feature appeared in the February 2016 issue of Stomp and Stammer.