Todd Rundgren Looks Over His Shoulder, Part One 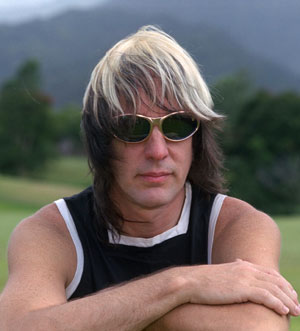 Todd Rundgren‘s professional musical career began in the 1960s when he was guitarist for a Who-influenced Philadelphia group called Nazz. That group never found widespread commercial success, though one of their singles (the original version of Rundgren’s “Hello It’s Me”) was a hit in some markets. By the dawn of the 1970s, Rundgren had embarked on a solo career of his own that would include a long and endlessly varied string of albums; a parallel career with his band Utopia; and a list of production credits for other acts including Badfinger, the New York Dolls, Grand Funk Railroad, the Psychedelic Furs, XTC, Meat Loaf‘s Bat Out of Hell, and dozens more.

Along the way, Rundgren scored the occasional hit (his 1972 solo remake of “Hello It’s Me,” “Can We Still Be Friends?” “Bang the Drum All Day”) but became revered as a cult hero on the strength and breadth of his musical vision, and for his technological innovations. In addition to writing the code for one of the earliest computer paint programs (long before Windows); he launched one of the first video production studios (in the pre-MTV era); he started PatroNet, one of the first artist-to-fan online networks (years before Myspace or Facebook); and he was involved in many other innovations.

One thing that Rundgren has rarely done, though, is look back. At age 67, he still releases new albums regularly, and unlike many of his contemporaries, has long resisted the lure of greatest-hits tours (though he’s often been a part of Ringo Starr’s All-Starrs tour lineups). Instead, Rundgren focuses on new music: in 2015 alone, he released two new albums that found him continuing to push boundaries: Global, for example, is a decidedly EDM-flavored release. And while that might seem an odd choice for an artist nearing seventy, one would do well to remember that Rundgren released an interactive hip-hop album (No World Order) way back in 1993. Todd’s other 2015 release, Runddans, found him collaborating with a pair of Scandinavian musicians on an album of what one might term “tuneful ambient” music.

It’s something of a surprise, then – even when considering that Rundgren can always be counted upon to surprise – that in late 2015 he launched a concert series called “An Evening with Todd Rundgren.” This tour is one in which he – gasp! – focuses on the hits and fan favorites from his vast catalog. Backed by longtime musical associates Jesse Gress (guitar), Kasim Sulton (bass), John Ferenzik (keyboards), and drummer Prairie Prince, Rundgren serves up both deep catalog gems and his biggest hits, the kind of set list longtime hardcore fans have only dreamed of. I recently spoke with Todd Rundgren about the tour, his past, and his future.

Bill Kopp: While you’ve enlisted different players for different projects, the band for this current tour brings back a lineup you’ve worked with since, if I recall correctly, the With a Twist era shows circa 1997…

Todd Rundgren: We’re about twenty years with this particular lineup.

BK: Aside from the fact that they’re all excellent musicians, what draws you to this particular group of players?

TR: You’re trying to find someone who understands what you’re going for, even while you’re having difficulty conveying that to them. It’s the same kind of thing as with the audience: you have to be used to having to re-adapt often. Learn new stuff, or take a different approach to things.

That was pretty much what With a Twist was about in the first place: taking all those conventional arrangements, and completely recasting them in a different era. It keeps it interesting for all of us. And I think the band would be no more happy than I would be if we had to play the same songs every night, in the same order, year after year after year.

BK: With modern technological developments, artists such as yourself are able to make albums using a computer rather than a traditional studio. For many years, you produced other people’s albums. These days, you’re doing less of that. Are those two things connected?

TR: No, I don’t begrudge other people learning how to make their own records! I realize that producing used to be my principal source of income. But that had to go, along with the traditional record company model. I have always tried to gather as much of the process to myself as I could over the years; that’s why I built a studio for myself fairly early on. And most all of my recordings have been done in some facility of my own creation, even if it’s only, y’know, a barn that I rent for the course of a recording.

It would be really hypocritical of me to say, ‘Oh, nobody else should do that; they should let me continue to control things!’ And I think that a lot of amazing music comes out of [self-producing]. People have the freedom to spend as much time as they want, noodling around with their own ideas, refining their approach. In the end, music is supposed to be what matters, not the entire economic system that revolves around it. But the experience of hearing something, of making something that excites you in some way, speaks to you in some way.