“I’ve certainly never been shy about giving my opinion,” says the stand-up comic and host of HBO’s Real Time with Bill Maher. “Sometimes people ask me, ‘Are you just trying to get a rise out of people, or play Devil’s advocate?’ And I’ve told them for twenty-three years – since I started on television – ‘No. I always say exactly what I think, whether my own audience boos me or not.’” Bill Maher will share what’s on his mind on his current stand-up tour, with dates across North America now through June 2016.

Maher’s comedy is topical – to say the least – but it’s also honest and heartfelt. “I never say anything I don’t believe. Now, I do say things just to get laughs; I mean, I do tell jokes. I’m a comedian. But the premise of the joke is never false,” he says. “I never pretend that I’m a Ted Cruz fan.” 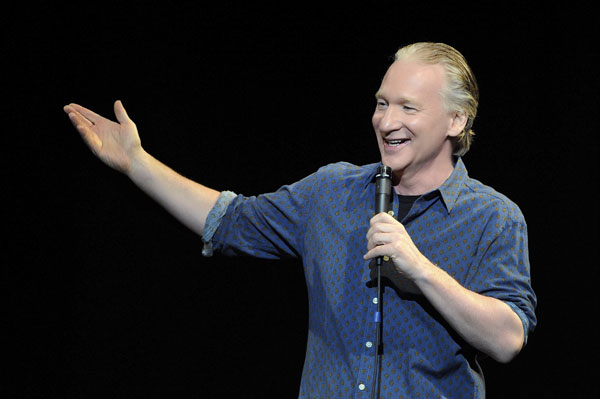 Though he’s quite outspoken, and his Real Time discussions often feature contentious back-and-forth exchanges, Maher insists that he doesn’t actively court controversy. “I think it would be a much better world if everyone just agreed with me on everything,” he laughs. “But they don’t.”

Grist for Maher’s politically-focused stand-up material often comes from engagement with people across the country. He says that when he travels, “I always ask people, ‘What’s going on here? What’s the local scandal? What’s going on with the local congressman?’ That, to me, is fascinating. Because – and of course I’m not the first one to say it – politics is local. Most people care about what’s going on within fifty miles of their house.”

Maher’s keen interest in politics developed early. “I grew up in a political household,” he says. “My father was a radio newsman, in the era when every radio station had news at the top of the hour.” His early stand-up gigs focused on politics, too. But he admits that his routine “wasn’t working very well, because the audience doesn’t look at a twenty-three year old as someone with nearly the kind of gravitas that is required to comment on political events. I wish, now that I’m 60, that I had a little less gravitas!”

In 1993, Maher launched a new show on the Comedy Central cable channel. He says that Politically Incorrect was “the show that I always wanted to do: a political roundtable.” Though the show earned many awards including an Emmy, some of Maher’s comments in the wake of 9/11 offended the powers-that-be, and his contract was not renewed. He quickly started Real Time with Bill Maher on HBO in 2003; the show is now in its 14th season, and has been nominated for ten Primetime Emmy Awards and six Writer’s Guild Awards. Real Time showcases Maher’s considerable skills as stand-up comic, political commentator, and moderator of lively discussions.

Though Maher characterizes himself as a “proud liberal,” he rarely lets his fellow left-leaning folk off the hook. “The audience that comes to the television show is often too politically correct for my tastes,” he observes. “And very often, they are just cheering for the ‘blue team.’ They don’t seem to be as informed as they should be: they know Obama’s perfect, Sarah Palin’s an idiot. Anything that’s anti-red team, they cheer. And that’s not really a good way to have discourse.”

“I think the conservatives definitely are the group that has brought this country to a place where it should never have gotten. But liberals are not right on everything,” Maher says. “And they need to hear it sometimes.”

Bill Maher especially enjoys bringing his stand-up performances to so-called red states. “I know that’s counter-intuitive,” says. “It’s much more having to do with city versus rural. The cities in the south are not really different than the cities anywhere else in this country. There are lots of free-thinking, liberal-thinking, wonderful people – my people – and when I come to a place like Jackson, Mississippi, they come out of the woodwork.” He notes that “When they look around the theatre, they’re like, ‘Wow! I thought I was the only one. There’s thousands of us!’”

Though he regularly deals in what he sees as being wrong with America, Maher remains resolutely upbeat. “As much as I make my living criticizing it, gee whiz, it could be a lot worse,” he says. “We’ve got our problems, but we still have it pretty good over here.” Unsurprisingly, he doesn’t go in for jingoism. “I’m not one of those people who says, ‘Hey, it’s the greatest country in the world.’ I say it’s the greatest country for me. I don’t need to go up to a Belgian guy and say, ‘Hey, you Belgian fuck! I live in a better country than you do!’ But believe me: I’m not asking for the check. I’m stayin’ here.”

Note: The full transcript of my conversation with Bill Maher is here.