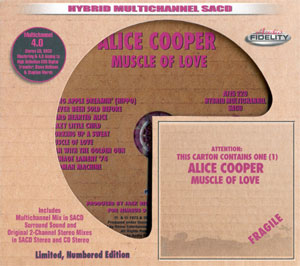 Dedicated fans of 1970s rock know that Alice Cooper means two different things: there’s the vocalist born Vincent Furnier, and there’s the group he fronted from the late 1960s (when they were known as The Spiders) through 1973. Though post-’73 albums were released bearing the name Alice Cooper, those (with the exception of 1974’s Greatest Hits) were “solo” albums, or at least albums made with a different cast of musicians.

While acknowledging the substantial creative contributions of guitarist/composer Dick Wagner, the “real” Alice Cooper (group) ceased operations at the tail-end of ’73. And their final album, Muscle of Love, has unfortunately been lost in the large discography; it’s an overlooked gem worthy of deeper investigation (or at least another spin).

Muscle of Love occupies a curious spot in the career arc of Alice Cooper-the-singer. After some theatrical-leaning records, Muscle is, for the most part, a very straightforward affair, focused on riff-rocking tunes. The production aesthetic is almost what one might call intimate, as opposed to the grandiose, arena-size vibe of many other discs in the AC catalog. Though Bob Ezrin – a man who excelled at bombast, and that’s a complement — had produced the previous three Alice Cooper albums, for Muscle of Love, the band brought back Jack Richardson (Ezrin’s co-producer on 1971’s Love it to Death) and enlisted Jack Douglas as co-producer. Their no-bullshit approach suits the music perfectly.

Muscle of Love was the last gasp of Alice Cooper-the-band, and a fine, underrated gasp it turned out to be. But it was no commercial smash, reaching #10 on the album charts. (For most artists, #10 on the Billboard 200 would be impressive, but in the wake of the platinum-selling Billion Dollar Babies, not so much.) Two singles were released from the album: the non-charting title track, and “Teenage Lament ’74,” which rose only to #48 on the Billboard singles chart.

Though the group was augmented in the studio by Wagner (plus strings, horns, bits of banjo and violin from studio sessioners), Muscle of Love is still a band record. Glen Buxton wails in a dirty rocking style of the era, guaranteed fun for fans of Mott the Hoople and other heavy rockers. The rhythm section of Michael Bruce and Dennis Dunaway is precise enough for rock, but (thankfully) not too precise, and never ever slick.

“Never Been Sold Before” nicely melds the rocking basic tracks with brass augmentation; When lead guitar and beefy horn section spar mid-song, everybody wins. In fact none of the nine tracks is a throwaway, though titling a song “Teenage Lament ’74” all but doomed it to be frozen in time: I mean, what self-respecting teenage rock fan wants to listen to a song that references ’74 when it’s already, y’know, 1975?

The Cooper/Bruce composition ‘Crazy Little Child” is a studio concoction that has little to do with rock, but it’s fun nonetheless. Some listeners may detect the influence of Elton John and Bernie Taupin on this track. With an early jazz saloon feel, “Crazy Little Child” points the way toward Cooper-the-man’s future, more theatrically-bent direction. In fact, it might also suggest the influence of Flo & Eddie, the ex-Turtles who were opening concerts for Alice Cooper around this time.  Meanwhile, “Working Up a Sweat” isn’t that far musically from The New York Dolls, when you think about it.

Perhaps the finest moments on Muscle of Love come during “Man With the Golden Gun.” If you’re thinking to yourself, “Hey, the James Bond movie of the same name came out in December 1974, almost the same time as Muscle of Love,” well, you’d be correct. You may also note that this isn’t the song used as the film’s theme; that honor went to a tune sung by Lulu. But Alice Cooper’s “Man With the Golden Gun” was purpose-written – but not chosen – for that film. Cinematic touches abound, and it would have worked wonderfully well as the official theme. It’s easily one of the most unjustly-overlooked titles in Cooper’s whole oeuvre. Listen closely to the backing vocalists: what you hear is Liza Minelli, Ronnie Spector, and the Pointer Sisters. 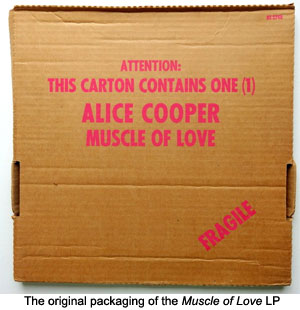 Alice Cooper and their management knew their audience: this was the age, after all, that begat KISS, a comic book act to rival The Archies in their authenticity. Previous Alice Cooper group albums had been sold in packages that relied on some or other clever gimmick: Billion Dollar Babies (1973) included a large ersatz bank note in the sleeve-as-moneyclip. Before it, 1972’s School’s Out was housed in an elaborate, die-cut sleeve that opened to resemble an old-fashioned school desk (and the record itself came clothed in panties!).

With those designs as precedence, the more straight-ahead, stripped down aesthetic of Muscle of Love called for a package that put that idea across. What better than a corrugated cardboard box? And hey, let’s add a greasy stain along the bottom, as if to suggest that the greasy rock’n’roll contents had leaked into the cardboard? The 2015 SACD reissue doesn’t come housed in a cardboard box, but the current-day designer did a fine enough job of reproducing the general look (if not feel) of the LP packaging.

After this, Cooper-the-vocalist parted ways with his longtime band, built upon his working relationship with Wagner, and brought back Ezrin the bombast king. Those alliances produced some fine, durable music, but the era of in-your-face, stripped-down rock a la Muscle of Love was over.