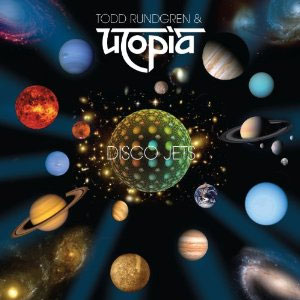 Todd Rundgren has long been known for being, as the expression goes, ahead of the curve. His experiments, forays, and even innovations in computer and video technology are well-documented. The same holds true for his pioneering work with artist-to-peer networks, the too-ahead-of-its-time PatroNet service of the mid 1990s. And of course Rundgren has always been in the vanguard of self-contained music, recording entire albums by himself.

But as much as his legion of hardcore fans looks forward to his every musical excursion and utterance (note that I count myself among said group), it’s true that – on occasion at least – Rundgren has been behind the curve. (That’s not to denigrate the quality of the associated work.) It can be argued that his adventures in progressive rock and fusion (the first self-titled Utopia album, his solo LP Initiation) came a bit late in the game. And the (still excellent) bossa nova musical cul-de-sac that was With a Twist was released at the trail end of the brief “cocktail nation” mini-craze (see also: Combustible Edison).

And so it was, too, with a curious project upon which Rundgren embarked in the year of the American Bicentennial, 1976. Though the form had been around for a number of years (at least in a prototypical guise), the soul/r&b offshoot genre known as disco rose to the level of mainstream culture in 1974; think of Carl Douglas‘ one-hit-wonder “Kung Fu Fighting”. By 1975 it was even bigger, thanks in part to Giorgio Moroder‘s production for Donna Summer, “Love to Love You Baby.”

When those singles were topping the charts, Rundgren was firmly establishing himself in a wholly different milieu with the aforementioned Todd Rundgren’s Utopia (October 1974) and Initiation (June 1975). Both were recorded with large musician ensembles; Utopia was, in those days, a seven-piece outfit.

Shortly thereafter, Rundgren pared Utopia down to a four-piece, retaining keyboardist Roger Powell and drummer John “Willie” Wilcox. Initially, the fourth player was bassist John Siegler; this lineup recorded Rundgren’s Faithful LP (May 1976), but were not credited as Utopia. For what would have been their debut release as a Utopia quartet – and for reasons unclear – this streamlined prog ensemble decided to cut a disco album.

No, really. Ensconced in Rundgren’s studio in Bearsville, New York, the group cut what would come to be known as Disco Jets in just a few days. And listening now, the entire project sounds like a goof, perhaps the product of some herbally- and/or chemically-encouraged mischievousness. It’s hard to imagine otherwise: Disco Jets is littered with too-topical-by-half subject matter: how else to characterize “”Cosmic Convoy,” a nod to C.W. McCall‘s November 1975 novelty ode to CB radio and truckers? Or perhaps “Pet Rock,” a tribute to the most popular Christmas gift of the 1975 holiday season? Perhaps you’d prefer “Space War,” replete with analog bloops and bleeps courtesy of keyboard whiz Roger Powell?

There’s a disco version of the Star Trek theme, too, as well as a tune called “Time Warp” (not the Rocky Horror Show camp classic), and a ditty called “V.H.F.” All of it is very, as Teenage Fanclub coined the phrase decades later, bandwagonesque.

So yes, it is surprising that an artist of Rundgren’s caliber would have recorded such an album as Disco Jets. It’s perhaps less surprising that he and the band ultimately decided against its release. The tapes did circulate among (cough, cough) bootleg aficionados, and Disco Jets did get a Japan-only release (as part of an expensive box set) in 2001, a quarter century after its, um, shelf date. Finally and recently, Disco Jets has gotten wide release in the USA and elsewhere.

And y’know what? It’s not nearly as terrible as its reputation might suggest! The musicianship is first-rate, although Wilcox’s drumming is mind-numbingly repetitive (hey, that’s what the project demanded). It’s lightweight, to be sure, but in retrospect, that fact seems to have been clearly understood by its makers. In the official release’s liner note essay by Mark Powell, keyboardist Roger Powell (no relation, I don’t think), is quoted as saying, “The album was a hoot to record. I remember laughing so hard that I cried.” Taken in the spirit in which (if official accounts are to be trusted) it was made, Disco Jets is a truly fun – if decidedly inconsequential – album. Rundgren fanatics will find it that curious creature that is both essential and rarely-played.