Album Review: The Scenics — In the Summer 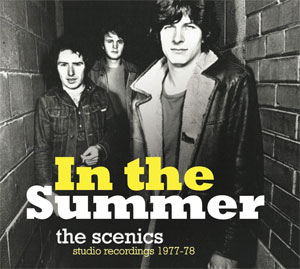 In early 2013 I reviewed Dead Man Walks Down Bayview, a then-new album from Toronto-based band The Scenics. In that review, I made clear both my nearly nonexistent knowledge of the Toronto punk scene of the 1970s (or any era, for that matter) as well as my appreciation for the music on the contemporary album.

Back in their first incarnation (1976-82) the group released but one album, 1979’s Underneath the Door. These days – assuming you can find it at all – that vinyl record (issued on Bomb Records) changes hands for US$25 and up (way up, in fact). But the group did make other recordings in that era, and a new CD collects those twelve tracks onto In the Summer: Studio Recordings 1977-78.

I won’t be the first to point out the clear debt that The Scenics owe to Loaded-era Velvet Underground. But there’s clearly a more modern-thinking aesthetic at work that’s more in tune with some of the artier, fringe elements of the era’s punk movement. Several of the songs on In the Summer are of a piece with very early Talking Heads and Pere Ubu in their angular, hopped-up delivery. But the trio displays a healthy understanding of pop music fundamentals – in other words, what makes a good song a good song – and translates that understanding into their songwriting and arrangement. Specifically, the group’s use of vocal harmonies – guitarist/bassists Ken Badger and Andy (Ramesh) Meyers – elevates The Scenics above much of the also-rans in that class of ’77.

Highlights abound. Ken Badger’s lead vocal on “O Boy” may be too yelpy for some, but it’s a fun tune nonetheless. Meyers’ sing-speak lead vocal on “Great Piles of Leaves” suggests a more well-adjusted Jonathan Richman, albeit with a more interesting band. Despite its seemingly upbeat title, “Sunshine World” is a stuttering, atonal herky jerky punk tune perfect for pogoing. The title track veers surprisingly close to a jangly sound that presages the paisley underground movement by a good six years. “Gotta Come Back Here” is The Scenics somehow combining melodicism with atonality. With its saxophone squawks (courtesy Meyers), “So Fine” suggests Captain Beefheart (and it’s just as toe-tappingly catchy a tune as that description suggests). “Not Dead Yet” suggests a less-frantic Television. The other seven tracks all have their charms as well.

The tunes collected on In the Summer come from two separate sessions: one in June 1977 with drummer Mark French, and a second one four months later with Brad Cooper behind the drum kit. Sequenced in jumble-order on the disc, the tracks from those two sessions don’t exhibit fundamental differences in the group’s overall sound.

Random fun fact: from 1980-82 (a period not documented on In the Summer, but on a 1981 single), the band featured Ken Fox on bass guitar; since 1990, Fox has held that position with The Fleshtones.