The Handcuffs: A Tale of the Tape (Part 1)

Midwestern rockers The Handcuffs are fronted by songwriters Chloe F. Orwell (guitar/vocals) and Brad Elvis (drums); they first came to my attention via their 2011 album. In my capsule review of Waiting for the Robot, I described their music as “not so much powerpop as plain ol’ (if very good) rock.” And that description suits the Chicago-based group just fine: the term “powerpop” – even when it’s meant in a positive sense – is something of a third rail with them. (“To me,” Chloe says, “powerpop means a rock band that plays bubblegum music.”) With an unassailable rock pedigree – both were in the group Big Hello, and Brad was one-third of the criminally-overlooked Elvis Brothers – The Handcuffs make music that is sexy, swaggering, and full-on rock’n’roll.

Though The Handcuffs have released three full-length albums (Waiting for the Robot being the most recent of those), their latest release takes a different approach: it’s on cassette. Yes, cassette tape: that long-thought-obsolete physical format that offers only the advantage of portability. Why on earth would a band do such a thing in the middle of the 21st century’s second decade? 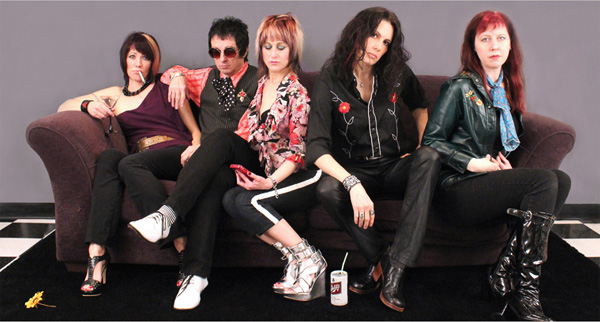 “Well, actually,” explains Brad Elvis, “we got asked. There’s a thing called Cassette Store Day…there’s not really such a thing as cassette stores…and this is like the second or third year. That’s what the kids are doin’ these days,” he laughs. “A small label out of east Nashville, Semi-Pro Records, wrote us: ‘We really dig The Handcuffs and all you’re doing. We think you guys would be a good candidate to release a cassette.’”

“We were like, ‘We’re in!’,” says Chloe. “But then they said, ‘We need the stuff in two weeks.’ And we said, ‘Oh, fuck! But we’re still in.’” Brad adds, “It was two days before I was leaving to go out on a tour.” (An in-demand drummer, Elvis tours with The Romantics and does live and session work for many other bands.) “So we were scrambling: what are we going to release? What are we going to do? Chloe was left here to mind the fort.”

The pair made the strategic decision to make the cassette, titled All the Way from Memphis Chicago, a best-of sampler of the group’s music. This made sense, because the market for the cassette format would include people unfamiliar with The Handcuffs’ music. “And we had an almost-complete new recording in the can,” Chloe says. “It’s one of the beloved covers we do, Mott the Hoople‘s “All the Way from Memphis.” The Handcuffs are not a cover band, but the Mott the Hoople song fits seamlessly into the group’s glam-informed musical aesthetic. 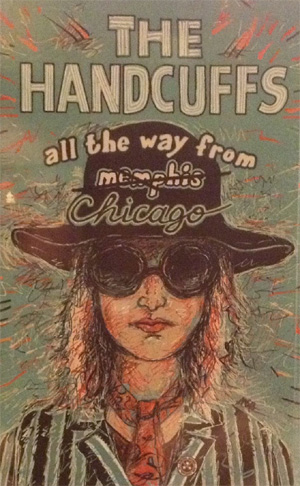 “Any time you put your existing songs on a different format, it makes it new,” Chloe says. “As an artist, it’s fun to revisit that stuff. And I think a lot of our our fans enjoy the – dare I say – kitsch factor of being able to hold a cassette. And there’s stuff inside! It’s almost like when you were a kid, and you got a cassette or record album. You’d pull things out of it that were unexpected, like trading cards. You can take out the j-card and look at it, read things. Nobody does that any more, because everything’s downloads.” (All the Way from Chicago does include a download card, too.)

And although the cassette medium isn’t generally held in high esteem when it comes to sonic quality, the group made a special effort to ensure that All the Way from Chicago sounded as good as possible. “We had it remastered for cassette, actually,” says Chloe. “It gave the sound a nice analog [warmth], which is missing in a lot of music.”

Our conversation turns inevitably to the subject of MP3. “The internet and MP3 are both the best things and the worst things to happen to music,” Chloe says. “On one hand, they made music accessible to anyone and everyone. And on the other hand, [MP3] made it all sound like…shit.” There’s also an old-fashioned (yet completely valid) school of thought that argues in favor of the artistic/aesthetic importance of albums-as-a-whole, a quality that’s often lost when music is in a downloadable format. “Like an artist,” Brad suggests, “You don’t do a painting and then leave it sitting in your house where no one sees it. You make an album, and you hope people will hear it and like it, get used to it, and like the ‘brand.’ And our brand is The Handcuffs. It’s a full package, like a storefront.”