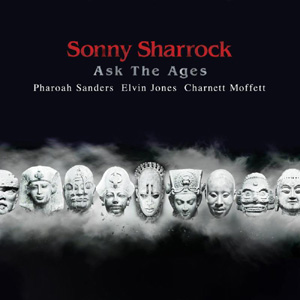 Outside the relatively small population that appreciates jazz, Sonny Sharrock is little-known. And that’s quite a shame, because the guitarist (who died in 1994) had a lot to offer musically, even to those whose tastes don’t extend far beyond the confines of rock’n’roll.

The first widely-heard example of Sharrock’s boundary-pushing style was in perhaps the unlikeliest of places: on a Herbie Mann album. Though Mann is now (and belatedly) recognized as an early exponent of world music, in the 1960s he was held in somewhat less esteem, perhaps unfairly seen as a lightweight and a musical dilettante. On the landmark and game-changing Memphis Underground LP (1969) Mann explored Southern soul, but with an unusual bent: in addition to the funky soul underpinnings of the music and his own distinctive lead flute playing, Mann enlisted the talents of two serious electric guitarists. And as impressive as Larry Coryell‘s work on Memphis Underground is, it’s Sonny Sharrock who steals the show with his aggressive, distorted, atonal axework. (He played on eight other Herbie Mann albums as well.)

Modern mainstream pop culture audiences got one more taste of Sharrock’s work in 1994 when the guitarist was asked to contribute his wild, skronky lead work to what would become the theme song for Cartoon Network’s Space Ghost Coast to Coast. He passed away shortly thereafter.

But the final studio album released under his own name during his lifetime, Ask the Ages, remains one of Sharrock’s finest works. Newly reissued with superior album cover art, the 1991 album features six compositions, all Sharrock originals. Produced by Bill Laswell – with whom Sharrock had worked for a number of years in the punk jazz outfit Last Exit – Ask the Ages explores both the melodic and more abstract edges of the jazz idiom.

With an all-star band that features saxophonist Pharaoh Sanders, upright bassist Charnett Moffett, and drumming legend Elvin Jones, Sharrock seamlessly integrates his electric guitar into a variety of jazz substyles. “Promises Kept” features a repetitive riff played in a loose manner while Sharrock rips shit up on his guitar. The tune moves into some abstract metal areas that are sure to horrify jazz purists and by-the-numbers rock fans alike. “Who Does She Hope to Be” is an altogether more subdued, contemplative number; here Sharrock harmonizes on some lovely interplay with Sanders, and spins out some delightfully melancholy lead guitar work.

“Little Rock” is as close as this ensemble comes to big band jazz. Moffett and Jones hold down a swinging, sometimes splashy backbeat while Sharrock cuts loose on guitar; it’s only the rhythm section that keeps the piece rooted in any sort of conventional time signature. Sanders blows mightily in the tune’s second half. “As We Used to Sing” feels a bit like an adventurous take on 1960s spaghetti western movie theme music, shot through with a kind of Sun Ra sensibility. It gets more disjointed as it progresses, and ends without bowing to convention and restating the head.

“Many Mansions” kicks off with a half-minute of Jones soloing before Moffett joins in, followed by Sharrock and Sanders in a moody work that suggests film noir. Sanders’ soprano sax and Sharrock’s electric guitar sometimes seem at cross purposes, but that’s almost certainly intentional; at many points their performances complement each other quite well. The disc wraps with “Once Upon a Time,” an understated, percussion-heavy instrumental tone poem that provides a showcase for Sharrock’s heavily distorted chording and soaring single-note lead work. Elvin Jones, in particular, seems to be playing a wholly different song than his band mates, but it’s one that somehow still fits.

Though not recommended for the unadventurous listener, Sonny Sharrock’s Ask the Ages is truly one for the ages, an exemplar of the man’s work and a pure example of one of the most fully realized syntheses of rock and jazz sensibilities.