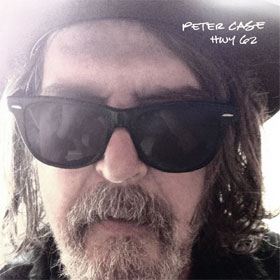 Peter Case first came to notoriety as one third of The Nerves, a critically acclaimed power pop trio that didn’t hang around long enough to capitalize on the genre’s brief commercial heyday. His next group, The Plimsouls, was far more successful: their classic “A Million Miles away” was prominently featured in the 1983 film Valley Girl. But the lyrics of Case’s story songs have long had a literary heft that is often better conveyed though a more acoustic-oriented arrangement; while rock’s soaring power chords could give an anthemic quality to songs like The Plimsouls’ “Oldest Story in the World,” electric guitars aren’t the subtlest tools for song delivery.

Perhaps realizing that, Case made a decision to direct his solo career in a more musically understated direction; it’s one that has served him well on more than a dozen solo albums since the mid 1980s.

The sturdy songs – like the evocative, windswept “New Mexico” – are textbook examples of strong lyrics set to understated (but solid) musical backing. Case’s twelve-string acoustic lends the arrangements a bigger sound than they’d otherwise have. But it’s worth noting that nearly all of the disc’s eleven tracks would have worked well in full-rocking mode. The shouted “one-two-three-four” of “All Dressed Up (For Trial)” is something of a red herring; the tune feels like an unplugged arrangement of a soaring, fist-pumping rock tune.

Even in a sort of troubadour mode, Peter Case’s strong sense of melody – his powerpop roots, if you will – elevate the songs on HWY 62 well above the folkie-with-an-acoustic idiom.

The contemplative “The Long Good Time” is a reminder that Case is a kindred spirit with Sid Griffin, another important rocker (The Long Ryders) whose musical trajectory has taken a quieter direction (his solo work and The Coal Porters). The album closes with the tantalizingly brief title track, an instrumental featuring only Case on saloon piano.

It’s a testament to Case’s well-placed faith in his own lyrical ability that he follows a subtle musical approach. His voice is hypnotically alluring, and listening to HWY 62 is an intimate experience.